The Rothenburg is the ruin of a hilltop castle at 350  m above sea level. NN in the municipality of Steinthaleben in the Kyffhäuserkreis , Thuringia . It is located on a steep mountain ledge on the northwestern edge of the Kyffhäuser Mountains . The castle complex was used to control the passing salt road , which led from Bad Frankenhausen over the Kyffhäuser to Kelbra . Parts of the palace , the castle chapel and the keep have been preserved .

A red sandstone was mainly used as building material for the castle complex . The Rothenburg probably owes its name to this. The name could also be derived from forest clearing.

Rothenburg was first mentioned in a document in 1103 with the noble Christian von Rothenburg , one of the two murderers of Count Kuno von Beichlingen . Since 1128 one finds this Christian increasingly as partisan of Emperor Lothar III. what must have been to his advantage. A son of Christian became the founder of the small county of Kirchberg in the Hainleite in 1155 , while the main line of the Rothenburg counts died out in 1209.

The Counts of Beichlingen became the new lords of the castle . During their rule around 1300, the minstrel Christian von Luppin , who was famous in the Middle Ages, also stayed at Rothenburg. Emperor Otto IV undertook a campaign to Thuringia in the summer of 1212, during the Staufer-Welf throne dispute, during which he conquered the Dryburg near Langensalza and the Rothenburg. The emperor had heavy siege equipment used. Only the nearby Runneburg could not be conquered.

The castle, which was partially destroyed, was rebuilt and modernized after the emperor's departure; the hall and chapel probably date from this construction period. Until the end of the 16th century, the castle changed hands several times until it went to the Counts of Schwarzburg as a man's fief .

The castle was restored and expanded for the last time in the 15th century. During this time the mysterious figure of Püstrich von Sondershausen was found in the ruined castle chapel . The find came into the royal cabinet of natural objects and curiosities of the Schwarzburger in Sondershausen . After the death of the last count in 1576, the decline of the Rothenburg began. Most recently, the robber Loth von Frankenhausen used the ruins as a shelter.

During the Romantic era , interest in the castle was awakened, and Heinrich Heine also contributed to this. With his biting satire, a winter fairy tale made Germany aware of the Kyffhäuser. After the construction of the Kyffhäuser monument , a large excursion restaurant was built next to the Rothenburg at the end of the 19th century from the building material left over from this monumental building, which replaced a restaurant that had been in existence since 1839. In 1906 , the distinctive Bismarck Tower was built in the northern part of the castle by the Association of German Student Associations - Kyffhäuserverband, an umbrella organization of German student associations , based on designs by Wilhelm Kreis .

During the time of the Third Reich , the NS-Reichskriegerbund carried out building measures on the Rothenburg (1937–1939), during which some archaeological and architectural observations were made and few finds were recovered. The castle grounds and the inn were later used by the SS as a rest home, as was the NVA during the GDR era . In 1956 the castle served as the backdrop for the DEFA film Thomas Müntzer - A Film of German History . On display are the seemingly burning castle backdrop of direction Kelbra with vorbeiziehendem peasant troops , the palace and the castle keep with the wooden outside staircase. After reunification, the area was used by the Bundeswehr for a few years . The officers' and sergeant's dormitory for the Kyffhäuser barracks were housed in the guest house.

In the 1990s, security and restoration work was carried out again, including the uncovering of the completely forested viewing terrace below the Bismarck Tower. After the Bundeswehr withdrew, the site was sold and changed hands. The ruin has been closed since 2010 and is being restored. The hiking trail that had previously run across the castle grounds has now been relocated. The castle grounds can no longer be entered. 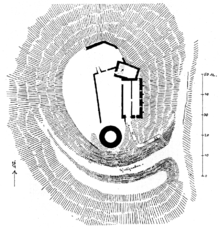 The castle complex consisted of the core castle and a section that is now built over with the completely demolished outer castle in the south . The main castle, which was oval in plan, was separated from the mountain by ramparts and moats and covered by the round keep on the attack side of the castle. This tower with a wall thickness of almost 3 m has a diameter of about 12 m and a residual height of 12 m. To the east of the tower, the gateway led over a drawbridge to the former gate. It was integrated into the main building and led through the ground floor into the spacious courtyard. At 20 × 9.5 m, this house , known as the Count's House, was the main building of the castle. On the upper floor, which can also be reached from the courtyard via an outside staircase, the filigree, richly decorated four-part windows point to the representative rooms of the castle. The ruins of the former chapel follow to the north. Excavations uncovered the ring wall, which was largely removed here , and the farm buildings and residential buildings attached to it on the west side . The northern part of the castle is covered by the Bismarck monument, there was also space for residential and farm buildings here.

Restaurant at the castle

In 1836 Karl Friedrich Wilhelm Beyer received the concession for an inn on Rothenburg from the Schwarzburg government. On August 1, 1836, it was opened in a small shack. The excursion restaurant, considered original and inexpensive, soon had success. Donkeys brought the necessary things up the mountain from Kelbra. The water was fetched from the Wasserkunst, a small mountain spring. Beyer only used the castle in summer. At that time, transports on Frankenhäuser Strasse were subject to road tolls, which were levied in the Rothenburg forester's house (now the residential building). At that time Kelbra was in the Kingdom of Prussia and Rothenburg in the Principality of Schwarzburg-Rudolstadt . When the beer ran out, the new order from the Kelbra brewery was allegedly made with the help of a three-meter-long mouthpiece. Many of the clubs of the time celebrated their parties and held meetings here. A singing festival was held here with around 200 participants.

In 1849 "Umstürzler" met at the inn on the Rothenburg. In retrospect, an attempt was made to blacken the innkeeper Friedrich Beyer as a participant in the prince. However, the latter stuck to Beyer and did not withdraw the coveted license from him. But when the prince died in 1867, the inn was given to Hermann Prinz from Bad Frankenhausen. However, this did not succeed in continuing the economy.