Kaufhof is a redirect to this article. For the street of the same name in Wolfsburg see Kaufhof (Wolfsburg)

Logo of the successor Galeria Karstadt Kaufhof since March 25, 2019

The Galeria Kaufhof GmbH was a German department store chain . It was founded in 1879 with a small shop for threads, buttons, fabrics and woolen goods by Leonhard Tietz . Further businesses followed, which were then merged in 1905 to form Leonhard Tietz AG . After strong expansion with its own production facilities and around 50 branches, the company name was changed to Westdeutsche Kaufhof AG in 1933 and, under the pressure of the Nazi regime, the company was forcibly sold to Commerzbank , Deutsche Bank and Dresdner Bank at the lowest prices . After the Second World War, the company, now only called Kaufhof, expanded a. a. through numerous acquisitions to the Kaufhof Holding and merged with Metro Cash & Carry in 1996 . In 2008 Kaufhof Warenhaus AG was converted into Galeria Kaufhof GmbH . In 2015 the Metro Group sold it to the Hudson's Bay Company , which in turn sold a majority stake to Signa Holding in 2018 . At the beginning of 2019, Galeria Kaufhof merged with Karstadt under the umbrella of Signa Holding and since then both have been operating under the common name Galeria Karstadt Kaufhof . 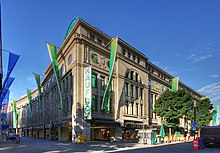 Galeria Kaufhof in Frankfurt am Main 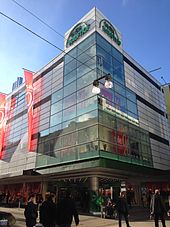 From the foundation to the end of the Second World War

In 1879 Leonhard Tietz opened a shop in Stralsund with a sales area of ​​25 m² for yarns, buttons, fabrics and woolen goods. His business principles - fixed prices, cash payments and the right of return - were a novelty at the time. In 1889 Tietz opened another branch in Elberfeld (since 1929 a district of Wuppertal , one of the most important industrial locations in Germany at the time). After three months, the branch moved to a larger house on the same street. In the first year, 40 employees worked in the shop. In 1890, Tietz also relocated the company headquarters to Elberfeld for a short time. In 1891 he opened a small department store on Hohe Strasse in Cologne ; In 1897 he moved the company headquarters from Elberfeld there. In 1905 he founded the stock company Leonhard Tietz AG from the previous purchase facilities . After Tietz's death on November 14, 1914, his eldest son Alfred Leonhard Tietz took over the management.

On its 50th anniversary in 1929, the company had its own production facilities and 43 branches with 15,000 employees. The corporation was founded in 1933 in Westdeutsche Kaufhof AG, vorm. Leonhard Tietz renamed, from 1936 the name suffix was dropped. In contrast to many other expropriated companies, the internal structure of the company was retained.

From March 1933, branches of the company were affected by the boycott of Jews organized by the NSDAP , which reached its first climax on April 1, 1933. Alfred Leonhard Tietz was forced to resign from the company's executive board in April 1933 due to political and economic pressure. He had to sell his shares to Dresdner Bank at a fraction of its former value . The Jewish Tietz family was subsequently robbed of their remaining assets by the Nazi regime and had to emigrate abroad. After the Second World War , the new German state agreed on compensation arrangements with the family.

In order to hide the name of the Jewish founder, the company was renamed Westdeutsche Kaufhof AG in July 1933 under pressure from the Nazi regime . In addition, members of the board of directors and higher management bodies of Jewish origin were recalled. Since then, the group has been owned by Commerzbank , Deutsche Bank and Dresdner Bank.

During the Second World War , 35 of the department stores were bombed.

In the following decades the company grew and in 1977 the Kaufhof, which was now operating as a group , achieved sales of DM 9.94 billion  . In 1988, the Kaufhof Holding's economic data led to it becoming one of the 30 founding members of the DAX .

In the 1990s the Kaufhof Holding was faced with the problem that the classic department stores had a relatively old-fashioned image. In particular, the increasingly affluent youth and young adults no longer bought their clothes in traditional department stores. The management tried to counteract the department store concept specially tailored to youthfulness. Aachen was the ideal location for a pilot project , since after the takeover of Horten there were two department stores of roughly the same size a few hundred meters apart. At the end of the 1990s, the former Horten department store in Aachen became “Lust for Life”. The range of goods was mainly aimed at customers under 40 years of age; Advertising and interior design should also appeal to this target group. There was another concept store in Munich: the U.Style was spatially integrated into the branch on Marienplatz and was also aimed at this target customer group. In addition, the former Hamburg Horten branch existed from 1999 to 2001 in the immediate vicinity of the Kaufhof house on Mönckebergstrasse (Hamburg). This house has been used by Saturn ever since .

Shortly before its merger with Metro Cash & Carry in 1996, the Kaufhof Holding consisted of the following brands:

Separation from the Metro Group in 2008

In spring 2008, the Metro Group announced that it would part ways with Kaufhof. An investment bank has already been mandated to organize the sales process. At the same time, an auditing company was commissioned to separate the Kaufhof activities from the Metro activities and to prepare a careful report. However, it would be another seven years before a final sale took place.

In the consolidation process, the closure of four branches ( Krefeld Am Ostwall, Leipzig -Paunsdorf, Mülheim an der Ruhr and Ludwigshafen ) for 2010 was announced on March 12, 2009 ; the expiring leases were not extended. Closing the branches in Coburg , Gießen , Wesel and Worms was considered; the leases that expired in 2010 were ultimately extended and the locations retained. On June 11, 2011, the management of the holding company announced the closure of the branches in Gießen, Cologne-Kalk, Nuremberg-Aufseßplatz (once Schocken; Merkur; Horten, Horten main headquarters in the 1970s) and Oberhausen-City on June 30, 2012 . The branches in Düsseldorf (Berliner Allee), Augsburg, Heilbronn (am Wollhaus), Bielefeld, Berlin Ostbahnhof and Lust for Life in Aachen have also been closed since the end of 2014.

On November 2, 2011 it became known that the Greek shipowner George Economou and also the owner of Karstadt at the time , Nicolas Berggruen , were interested in acquiring Kaufhof. The Metro AG confirmed this. Berggruen could have united Germany's two largest department store companies with one purchase.

The branch with the highest turnover is the one at Marienplatz in Munich ; its turnover in 2013 was estimated at almost 200 million euros.

Takeover of Galeria Kaufhof GmbH by Hudson's Bay Company in 2015

In spring 2015 the suspended sales process was resumed by Galeria Kaufhof GmbH . As a takeover candidate, the Canadian retail companies were Hudson's Bay Company and Signa Holding of René Benko . The Hudson's Bay Company was given preference . The sale was completed on September 30, 2015.

In March 2016, Kaufhof announced that it would renovate its branches in Germany for around one billion euros. The Kaufhof an der Kö (Düsseldorf) branch will be one of the first stores to be renovated. There should be a coordinated concept with the neighboring Carsch-Haus , which also belongs to Kaufhof.

In August 2016, Kaufhof operated 100 Galeria Kaufhof department stores , 60 DINEA restaurants in Germany and 16 Galeria Inno branches in Belgium . Together, these locations offer around 1.4 million square meters of retail space. As an omnichannel department store, Galeria Kaufhof GmbH closely meshes stationary and online business. You can buy items in the branches, in the online shop, using tablets within the branches and with a mobile app .

In November 2016, the completely redesigned basement of Galeria Kaufhof was opened on Düsseldorf's Königsallee. This is where the “Dream Concept” was implemented for the first time. In addition, the area was expanded to include the basement of the Carsch House , which now belongs to the Galeria Kaufhof Düsseldorf Kö. The flagship store of the noble design outlet Saks Off 5th has been located in the Carsch-Haus since June 2017 . This format is a sister company of Galeria Kaufhof. In July 2017, HBC planned to convert Sportarena branches into further Saks Off 5th outlets. In this context, Sportarena GmbH announced that it would cease its business activities at the end of January 2018. The Frankfurt, Wiesbaden, Heidelberg and Stuttgart locations have already been converted; the Freiburg and Bonn branches are to follow in 2018.

In June 2017, Kaufhof announced that it would close the branch in Gera in autumn 2018 and in Frankfurt's Nordwest-Zentrum in autumn 2019; the economic prospects at both locations are too bad.

In the summer of 2017, the commercial credit insurer Euler Hermes reduced the credit limit for Kaufhof by 80%. In December 2017, the insurer Atradius made a similar decision and reduced the guaranteed amount for Galeria Kaufhof to a large but unknown extent.

In October 2017 it was announced that the previous boss of the Hudson's Bay Company , Jerry Storch, was leaving the company. The group had posted a loss of 360 million euros the year before. Between February and July 2017 alone, Kaufhof is said to have lost around 50 million euros.

Signa Holding renewed its serious interest in Galeria Kaufhof in September 2017. Although the Hudson's Bay Company still denied any intention to sell at this point, there were still corresponding suspicions about Galeria Kaufhof GmbH. On November 1, 2017 Signa Holding offered three billion euros for Kaufhof AG, the receipt of this offer by HBC confirmed.

In July 2018, the Hudson's Bay Company agreed to the signing of several framework agreements for the majority takeover of Galeria Kaufhof by Signa Holding. In September 2018, plans to merge Galeria Kaufhof and Karstadt were published. The two former competitors were merged in the form of a joint venture under the Signa Retail umbrella , in which Signa received a narrow majority. The so-called Deutsche Warenhaus AG, consisting of 34,000 employees and almost 200 department stores, became the second largest department store group in Europe after El Corte Inglés . In November 2018, the Cartel Office approved the merger of Karstadt and Kaufhof under the leadership of the Signa Group.

In Hof (Saale) , plans were underway to reduce the size of the department store there in order to create space in the building for a Dormero Hotels hotel . After a long examination, however, Kaufhof found that the project was not feasible. The contract for the building therefore expired in January 2019, and Kaufhof withdrew from the city. The space that has been freed up is now being used by other retailers.

Stephan Fanderl , CEO of Signa Holding, announced a restructuring concept for Galeria Kaufhof on January 25, 2019: After the bad Christmas business, around 2,600 full-time positions (up to 5,000 employees affected) were to be cut and an exit from the collective bargaining agreement combined with the demand for a company collective agreement respectively.

Since March 25, 2019, Kaufhof and Karstadt have been operating under the common name Galeria Karstadt Kaufhof .

On June 10, 2019, HBC announced that it would sell its minority stake in the joint venture for $ 1.5 billion to Signa Holding, making it the sole owner.

On November 6, 2019, the management of Galeria Karstadt Kaufhof announced the merger of Galeria Kaufhof into Karstadt Warenhaus AG on January 31, 2020. After 141 years, this marked the end of Kaufhof's history. On July 1, 2020, insolvency proceedings were filed with the Essen regional court.

Kaufhof on the Kö in Düsseldorf

The concept existed from September 2006 to February 2008, it served as a project branch in downtown Oberhausen, in which a total of 33 trainees in their third year of training to become retail salespeople were allowed to run their own business with their own advertising, supply of goods and shop concepts. The trainees came from the neighboring branches in Essen, Mülheim and Oberhausen.

Own brands or typical brands

The Galeria Kaufhof GmbH has several private labels, which are found in the various product segments. One of the most widely represented is the manguun brand, which operated under the name mangoon until spring 2006.

Further own brands of Galeria Kaufhof GmbH are: