The Lac d'Emosson is a reservoir in the west of the canton of Valais in Switzerland . It lies in the parishes of Salvan and Finhaut .

The arch dam under construction, 1971

As early as the 1920s, the Swiss Federal Railways (SBB) built a dam on the Barberine plateau and dammed the 38 million m³ Lac de Barberine , which belonged to the Barberine-Vernayaz power station .

In the 1950s, the desire arose to use the storage facility further down the valley for a larger reservoir. This was only possible after the conclusion of a state treaty with France in 1963 and the construction of supply tunnels from the neighboring valleys. Among other things, an area swap was made so that the national border could be shifted so that the new dam wall is completely on Swiss territory. In return, France also received a right to use the system.

With the construction of the 180 m high arch dam Emosson by Motor-Columbus in the years 1967 to 1974 the Lac d'Emosson was created, which with a storage volume of 227 million m³ holds almost six times as much water as the old Lac de Barberine. The eponymous Alp Emosson was flooded.

A special feature is the fact that most of the water inflow comes from the mountains to the right of the valley through which the Eau Noire flows, while Lac d'Emosson is on the Emosson plateau to the left of the valley. The water is therefore first directed downhill into the valley and then uphill again into the reservoir, using the principle of communicating pipes . The water is collected in the French Mont Blanc massif under the Glacier du Tour and Glacier d'Argentière glaciers .

The Lac d'Emosson is operated by the Electricité d'Emosson (ESA). A special case is the joint use by SBB, which is not involved in ESA itself, but receives water from Lac d'Emosson through a contract with ESA, which compensates for the failure of the Lac de Barberine, which has sunk in the reservoir. In addition, the SBB had the dam wall of Lac d'Emosson increased in order to be able to use a further 17 million m³. The SBB power plants continue to operate under the original license, independently of the ESA.

When the water is low in spring, the dam of Lac de Barberine rises above the water level of Lac d'Emosson. 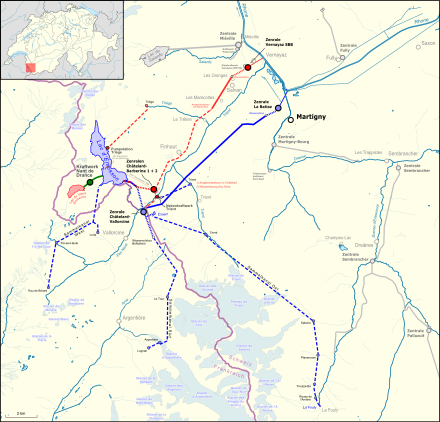 Map of the power plant systems at Lac d'Emosson . The Nant de Drance power plant is shown in green , the Electricité d'Emosson SA systems in blue , and the Barberine-Vernayaz power plant owned by SBB in red .

The Lac d'Emosson is a popular destination for tourists . The trip to the reservoir alone is a special experience, because a sequence of three mountain railways connects Le Châtelard with Lac d'Emosson. Le Châtelard can be reached from Martigny using the narrow-gauge Chemin de fer Martigny – Châtelard .

As the first stage of the " Parc d'Attractions du Châtelard " (PAC), a funicular takes you to Château d'Eau . With a gradient of up to 87%, this lift is the steepest two-cabin lift in the world. A height difference of 700 m is overcome over a length of 1300 m. The track width is 1007 mm.

This is followed by a panoramic narrow-gauge railway operated by accumulator locomotives with a view of Mont Blanc . The track width is just 600 mm; the relatively flat route is 1650 m long and winds along the mountainside to the Pied du Barrage station below the dam.

The last stage of this extraordinary journey is the Minifunic funicular , which transports passengers to the reservoir. The rubber-tyred railway with a track width of 900 mm overcomes a height difference of 140 m over a length of 260 m (maximum gradient 73%).

On August 23, 1976, well-preserved footprints of 250 million year old archosaurs were discovered above Lac du Vieux Emosson , which is about 2.5 hours' walk from Lac d'Emosson . These can be viewed in the summer after the snow melts.