The Muttsee (formerly Mutten See, Muttensee) is a reservoir on the Muttenalp in the southernmost part of the political municipality Glarus Süd in the canton of Glarus in Switzerland .

The original mountain lake has been integrated into the concept of energy generation by hydropower at the Linth-Limmern power plants since 1968 .

In the course of extensive expansion measures for the power plants between 2009 and 2017, the dam, built in 1963, was replaced by a concrete dam. This has a length of 1054 meters, which makes it the longest dam in Switzerland. The water level reaches a height of 2474 m when it is fully flooded  . This makes the Muttsee the highest reservoir in Switzerland with a volume of more than 10 million m³. The highest reservoir under the supervision of the federal authorities is the Viderjoch reservoir in the Silvretta Arena , which is located at 2664 m.

As a result of erosion in the Muttenalp subsoil, a lake basin formed after the subsurface Nummulite limestone and quartzite subsided. The Muttsee can be described as a karst and sinkhole lake .

Until 1917 the official name was "Mutten See", then the spelling "Muttensee" appears. From 1963 the spelling «Muttsee» appears. The Hühnerbühl is now called in vernacular as Hüenderbüel.

The kidney-shaped mountain lake was about 1000 meters long and 400 to 500 meters wide. On the Muttenalp plateau, known as the Hühnerbühl, it covered an area of ​​around 42  hectares . The height of the lake level was given as 2442  m until 1899 . In the years 1900 to 1962 with 2448  m . In the southeast the lake was drained by a brook, which after a few hundred meters, at approx. 2400  m , disappeared into the karst underground of the Muttenalp into the Muttseehöhle . A little south of it, the Muttenbach, from around 2450  m , collected the firn water of the Latten via various small inlets . He led this over the Mörthal and the Ochsenblanken to the Limmernbach.

In 1957, the newly founded Kraftwerke Linth-Limmern AG (KLL) began to implement the power plants planned by the Nordostschweizerische Kraftwerke (NOK) since the early 1940s , in which the Muttensee was to be integrated.

In 1963, the natural water content of the reservoir, now known as the Muttsee, was increased to 9 million cubic meters by the filling of a dam . The water level rose from 2,442  m to 2,446  m . With a constant length of 1000 meters, its width increased to 600 meters and the occupied area increased to around 61 hectares. 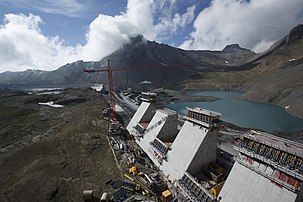 With the expansion project Linthal 2015 , the storage volume of the Muttsee should be increased again. For example, a gravity dam was built on the south side of the lake between 2012 and 2014 with a crown length of 1054 meters and a height of up to 35 meters. The water level rose to 2,474  m , which leads to a storage volume of 23 million cubic meters. The length of the lake is now about 1200 meters and the width 700 to 800 meters. The occupied area increased to around 84 hectares. The wall has a bottom outlet with a capacity of 22.5 m³ / s.

The dam was divided into 68 blocks, each 15 meters long, and two end elements 17 meters long. The pilgrim step method was used to build the dam . Because of the high alpine climate, construction could only be carried out in the summer months. In 2012, concreting of the wall blocks on the west side began. In 2013, the wall blocks and the flood relief system followed on the east side. In 2014 the wall could be closed with the construction of the middle blocks. The raw material for the 250,000 m³ of concrete required was transported to Muttenalp by cable car. This was the rock that had accumulated when the caverns and pressure tunnels were excavated for the power plants. On the Muttenalp, the stone was processed, temporarily stored and processed in the concrete plant as required. The final expansion and flooding of the pressure tunnels took place during 2015. The first damming of the Muttsee and the acceptance by the Federal Office of Energy took place in summer 2016 .

In August 2013, laboratory tests on a concrete sample revealed that a concrete mix was being used on a block on the east side that did not meet the quality requirements. The client, Axpo Power , had the relevant block partially dismantled.

Axpo is planning to build Switzerland's first large-scale solar system on the dam at Muttsee . It is envisaged 6000 PV - modules to assemble. These would occupy an area of ​​10,000 m² and should produce an annual production of up to 2.7 gigawatt hours (GWh) of electrical energy. This would correspond to the needs of around 600 households. The required planning application was submitted on November 29, 2019.