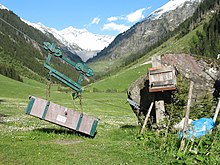 A goods lift , also transport cable car or goods cable car called, is a cable car which is normally only for the transport of goods, such as ore or food allowed.

One of the oldest material ropeways was the one built by the Dutchman Adam Wybe in 1644 for the construction of a bastion near Gdansk . The cable car was designed as a monocable , the material was transported in buckets. It was probably driven by a gopel , and a hemp rope was used as the rope . More efficient systems were only possible after the invention of the wire rope in 1834. Adam Wybe's system was patented by the Englishman Charles Hodgson in 1868 and later also referred to as the English system . It was widespread in the USA and especially in the mines of Colorado .

The Bergrat Freiherr Franz Fritz von Dücker described the bicable gondola for the first time in 1861 . It consists of a suspension rope on which the conveyors run on rollers and a pull rope that moves the conveyors. In the end stations, the carts are separated from the pull rope for filling and emptying, which requires a device with which the carts could be clamped to the pull rope during operation. These types of railways were built in Germany by Adolf Bleichert and Julius Pohlig . The two cable cars were accordingly also called the German System , Bleichertsche or Ottosche Seilbahnen , whereby Theodor Otto was an engineer who first worked with Bleichert in the  engineering office for cable cars in Schkeuditz , but then separated from Bleichert in 1876 and worked with Pohlig.

The Pohlig railways first used a so-called vice coupling apparatus. The connection of the trolleys to the pull rope was made by a clamp with a thread. The thread was closed by hand and opened by a stop when entering the end station. A weight lever coupling was later used, in which the screw clamps were operated with a weight lever that was knocked over by guide rails in the departure and destination stations in order to close and open the clamp.

Material ropeways are being built:

Material ropeway for cement during the construction of the Grande Dixence dam . Two parallel ropeways carried cement buckets that were delivered on special railroad cars.

Construction ropeways are used v. a. in inaccessible terrain (high mountains, ...) for example when building cable cars , railways , transmitter masts, mountain huts, etc. a. Also dikes at the Dutch Delta Plan project built by using cable cars, with the stones from the cable cars poured into the sea and so the dams were heaped.

Lorenseilbahnen are primarily used to transport bulk goods (raw materials such as ore or coal ) that are mined at a storage site to a distant loading or processing facility. They can be used to cover considerable distances (up to 96 km, see examples ) over rough and difficult terrain. They avoid the use of road transport vehicles or, in some cases, reduce high investments for the construction of rail-bound transport routes. A special feature of Lorenseilbahnen are the protective bridges over other traffic routes. They are designed to prevent tipping or falling carts from causing major damage. Most material ropeways were built in the first half of the 20th century in countries that did not yet have adequate transport routes.

Mobile cable car station for removing felled trees. The mast is guyed to trees in the area.

Ropeways are mainly used to bring hay into steep terrain and are operated by hand. The same for wood applies to wooden ropeways .

Another application for material ropeways is avalanche detonation ropeways , with which explosive charges are transported to the desired location to artificially trigger avalanches .

Material ropeways are mostly driven by a gasoline engine , diesel engine or electric motor . Larger material ropeways are usually designed as two- cable circulating ropeways, with a support cable for each direction and a circulating pull cable that moves the carts. Many small railways consist of a single suspension rope on which the load is attached to a pulley. The pulley is either pulled or lowered from above with an auxiliary rope, or deflected at the top and pulled up from below with an auxiliary rope. The auxiliary rope is wound on a special steel rope drum that is rotated by the motor.

There are (especially in the case of wooden ropeways that are only temporarily installed) radio-controlled trolleys driven by an internal combustion engine, the drive rollers of which are firmly pressed against the suspension rope and have a winch for lifting and lowering the load.

Due to the topography, there are thousands of material ropeways in mountain regions. These runways pose a major risk to aircraft, especially helicopters and hang gliders.

Many of these ropes are not shown on any hazard map and therefore increase the risk of collision.

In Switzerland , the Swiss Air Force has been offering free dismantling of material ropeways that are no longer required in order to reduce the risk for civil and military aircraft.