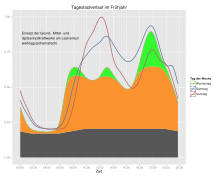 Demand peaks are often characterized by a sharp increase in the demanded power, so that quickly controllable peak load power plants have to be used for the power supply. These can provide high performance within seconds or minutes. These include pumped storage and compressed air storage power plants , but also modern gas turbine power plants .

In order to be able to ensure security of supply at all times, even with fluctuating electricity consumption , power plant management with peaks is necessary. From the point of view of power grid management, a distinction is made between three types of power plants that are used in different ways in the course of the load:

Methods are currently (as of 2011) being developed to absorb peak loads in a decentralized manner. For example, so-called load managers can be installed in households or short-term generator and load fluctuations in photovoltaic systems can be compensated for using hybrid inverters .

The increased demand for power during the day is usually very predictable. The course of demand over the day is known. It reaches its highest values ​​all year round between around 11 a.m. and 2 p.m. (up to 82 GW in Germany, 1 nuclear power plant = 1.3 GW), and from around mid-October to the end of March also often between around 4:30 p.m. and 7 p.m. . There are also quite precise forecasts with regard to the electricity feed-in of third parties (e.g. forecast of the feed-in from wind turbines and photovoltaic systems based on current weather forecasts). Timetables for the medium-load power plants are created from the expected course of the day. Smaller forecast errors are compensated for by the so-called control power , which power plant operators have to keep available in different amounts.

If the expected load profile cannot be covered, or not economically, by medium-load power plants, peak load is used:

Due to the failure of a base-load or medium-load power plant or an unexpectedly high load in the power grid, peak load power plants may become necessary. Various power plants are used one after the other to cope with acute failures:

Contracts traded on the electricity exchange

Peak loads are often traded on power exchanges , where in extreme cases they can cost several euros per kilowatt hour . On the power exchange, however, no distinction is made between peak load and medium load . All electricity traded on a daily basis is referred to as peak load, such as any increased electricity demand during the day that is around 50% above the base load at noon.

On the European electricity exchange EEX , peak-load electricity is traded in hourly packages between 8 a.m. and 8 p.m.