Bedretto is located west of Airolo in Val Bedretto . The localities of Ossasco, Villa (in former times Romig or Romegg ), Bedretto, Ronco and All'Acqua belong to the political municipality Bedretto . The parish hall is in Villa. All'Acqua is not inhabited during the winter months. The hamlets of Orello and Nostengo above Villa Bedretto were also settled in the past.

The political municipality Bedretto borders directly on the municipality of Realp in the canton of Uri and the municipality of Obergoms (until 2009 Ulrichen and Oberwald ) in the Valais in German-speaking Switzerland as well as the municipalities of Airolo , Cevio and Lavizzara in the canton of Ticino and Formazza in the Piedmont region in Italy , which can be reached via the Passo San Giacomo . During the Ice Age, the Gries glacier flowed from the Valais over the Cornopass (2485 m above sea level) into the rear Bedretto valley (Val Corno). The water from the Gries reservoir (2386 m above sea level) is conducted via pressure pipes, which are part of the Maggia power plant system, via Bedretto valley to Lake Maggiore (193 m above sea level).

In 1918 the canton of Ticino granted permission to mine the building lime deposits on Alp Manió. During and after the First World War, the Swiss industry also obtained this lime, which had hardly taken it into account beforehand due to its insufficient degree of purity. There was a soapstone quarry on Alp Cavanna ( 2020  m above sea level ) . The serpentine of the valley ( antigorite ) is greenish. The Rotondo granite is known by climbers because it is lichen-free due to its altitude and south-facing position.

Localities of the municipality of Bedretto 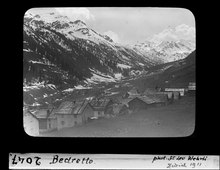 Historical picture by Leo Wehrli from 1911

Pre-Roman graves (villa) and Roman coin finds (Bedretto) indicate an early settlement. Bedretto was first mentioned in 1210 as Bedoledo and in 1457 as Bedreudo. When the Alps of the Leventina valley were divided up in 1227, Bedretto appears as a neighborhood and an independent parish. The valley probably separated from Airolo before 1277. In 1567 it owned 38 households (hearths). In 1594 the parish church Martiri Maccabei in Villa was rebuilt after an avalanche.

From the hospice in All'Acqua, two important mule tracks led over the Nufenen Pass into Upper Valais and over the San Giacomo Pass, where the San Nicolao Hospice mentioned in 1405 stood in Val d'Olgia, into the Italian Formazza Valley . In the steep Bedretto valley, avalanches often occur in winter and the connections between the villages and Airolo are often cut off. The village often suffered from avalanches, including on January 16 and 17, 1594 when the parish church and several houses were destroyed, on February 6 and 7, 1749 (destruction of Ossasco), on January 11, 1863 (death of 29 people); in the avalanche winter of 1951 the whole valley had to be evacuated. Mighty avalanche barriers have improved the situation. Since 1924 there has been a road from Airolo to Bedretto, since 1932 to Ronco and since 1964 over the Nufenen Pass.

During the construction of the winter-safe Furka Base Tunnel in 1977, a gallery was created from the middle of the tunnel to Ronco, the so-called Bedretto window , because a second tunnel connection between Oberwald and Ronco was originally planned. The tunnel has been closed since 1982.

In the past, each village had its own primary school . In 1960 a comprehensive school was opened in Bedretto , and today the few students attend classes in Airolo.

The valley lived mainly from agriculture (cattle breeding, alpine and dairy farming, potato and rye cultivation). Many residents had to look for work as chestnut roasters, waiters or house servants or emigrate seasonally in Italy and France.

In the 1950s and 1960s, Maggia Kraftwerke built a hydropower plant with water tunnels in two stages, which lead from the highest reservoir in Switzerland, the Griessee , to the Verbano power plant center near Brissago on Lake Maggiore . In the Bedretto valley, the Gries-Bedretto- Robiei feeder tunnel was built with the Cruina and Stabbiascio windows and the connections to the Cavagnolo, Val d'Olgia and San Giacomo streams . The license for the Magga 1 plant (Sambuco, Peccia, Cavergno, Verbano) lasts until 2035, that of Maggia 2 (Cavagnoli-Naret, Robiei, Bavona) until 2048. For the expansion of the Maggia power plants there was a - now closed - Power station railway from All'Acqua to Stabbiascio. On February 15, 1966, the worst mining accident in the canton of Ticino occurred in the Stabbiascio / Robiei gallery. 15 Italian miners and two firemen from Locarno were killed by poison gas in the tunnel.

After the Second World War, the valley became depopulated. In the summer months it is revived today with the return of locals and the influx of tourists and vacationers. Tourist bases are the SAC huts Corno Gries , Piansecco and Cristallina .

Today the community of Bedretto has only a few residents, mostly retired people. Since the valley offers few job opportunities and, moreover, is often completely cut off from the outside world in the winter months, most of the young people leave the valley. According to the census carried out by the Federal Statistical Office in 2000, Bedretto is the “oldest” municipality in Switzerland because it has the highest percentage of over 65s in the population. However, the population seems to have stabilized since the turn of the millennium.

In the oldest documents Bedretto was an independent parish and parish. When the Alps of the Leventina valley were divided up in 1227, Bedretto formed a neighborhood, but was the only one not to have an alp of its own. The modern foundation dates back to 1761 with the districts Ossasco, Villa, Ronco, All'Acqua.

The village image is classified in the inventory of protected sites in Switzerland (ISOS) as a site of national importance in Switzerland.

Political communities in the Airolo district