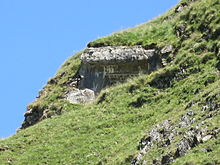 The artillery plant Grandinagia (army designation A 8444) is a Swiss artillery plant on the south side of the Gotthard Pass in the canton of Ticino . It is located at 2169  m above sea level. M. in the municipality of Bedretto in the Val Bedretto about 1.6 km from the Passo San Giacomo .

The factory was ready to fire in 1939 and has been cleared out today.

On the left flank of the Bedretto valley, an opponent was able to advance from the Italian border at the San Giacomo Pass directly to the Gotthard Pass and its fortresses ( Forte Airolo , Motto Bartola ), which were completed in 1890 . This proximity to the border formed a weak point in the defense system of the Airolo fortress. Since 1885 there was a log cabin on the pass, from which the telegraph troops reported to the two artillery works about incidents in the northern Val Formazza .

The road through the Italian Formazza Valley to the San Giacomo Pass, opened in October 1929, made it possible to take the Gotthard directly under artillery fire from the border. Based on the project submitted by the Gotthard crew's chief genius in December 1931 (block house, aerial cableway, half-battery), the fortification of San Giacomo was built in 1935–1939.

The blocking point comprises around 30 individual objects with the San Giacomo infantry plant (A 8442) and the Grandinagia artillery plant (A 8444), including two military cable cars. The whole arrangement is part of the Gotthard fortress . Gun shelters were built at Cioss Prato, Ronco-Selva and Ronco-Munda in the Bedretto Valley.

The All'Acqua blocking point had to block the mule track over the Nufenenpass. 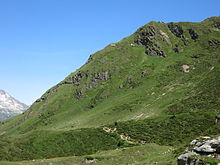 Grandinadia, nicks above and below

The under the north ridge of Pizzo Grandinagia 2774  m above sea level. M. lying work consists of the lower part with the two gun positions including observation post and shelter and the upper part with four machine gun positions. The artillery plant built between 1936 and 1938 was converted into an infantry plant in 1940 and the cable car was completely renovated in 1948. Additional shelters were built in the rock during the Cold War. For the external defense, well camouflaged and partially underground shelters were built in front of the fortress.

The armament consisted of two 7.5 cm Krupp fortress cannons on lever mounts and four Mg 11 machine guns . An infantry plant with a machine gun is located under the All'Acqua – Grandinagia cable car to protect the fortress from the Valle del Corno. The area of ​​San Giacomo was covered by the large artillery works built on the Gotthard southern front during World War II. 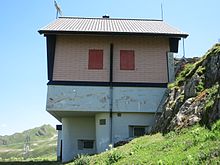 The infantry bunker San Giacomo (army designation A 8442) lies on a level at 2266  m above sea level. M. about 600 m northeast of the Italian border at the San Giacomo Pass. At the end of the 1930s, the blockhouse built by Swiss Customs was converted into an infantry factory with a small barracks. The wall thickness was doubled and three machine gun stands and a shelter were built under the adjacent rock. The armament consisted of five model 1911 machine guns on mounts.

The infantry bunker was connected to the second section of the cable car of the Grandinagia artillery plant.

A military cable car (aerial tramway) with two sections, built in 1948, led from All'Acqua at 1610  m above sea level. M. to Grandinagia 2122  m above sea level M. (Army designation Z 307) and on to the San Giacomo Pass (Z 308) and served to transport and supply the crew. Another cable car (Z 313) led to the entrance of the artillery plant. The cable car from the manufacturer Oehler / Garaventa was modernized in 1986. Today (2015) the lower section is still preserved.

The bunker hiking trail no.10 San Giacomo of the Fortificazioni Ticinesi leads past objects 01 to 05 in the San Giacomo area.