Hallberg-Rassy AB (HR) is a shipyard for ocean-going sailing yachts in Ellös , Sweden . The company is known for building high-quality Monohull - keel boats from 31 to 64 feet in length for cruising sailors.

The company goes back to two competing shipyards owned by the Swede Harry Hallberg and the German Christoph Rassy, who grew up on Lake Starnberg . Hallberg began building wooden boats in 1928, and in 1943 he began building his own shipyard in Kungsviken , on the island of Orust, west of mainland Sweden. After a few improvised one-offs, the first series-built sailing boats were named Folkeboot and Kungskryssaren . In 1963, Hallberg was one of the first yacht builders to follow the trend towards wooden boat hulls with an outer shell made of fiberglass-reinforced plastic . This technology was first used in Hallberg's self-drawn P-28 , which was sold 550 times mainly in Sweden and North America.

In the mid-1960s, Hallberg's company reached such a size that the shipyard in Kungsviken was no longer sufficient and a move to the more southern Ellös, also on Orust, took place. The old shipyard building was bought by Christoph Rassy. Rassy had learned how to build boats in a shipyard on Lake Constance . Rassy soon turned to Sweden and found work there at a shipyard in Nötesund , also on Orust. There he not only worked for the shipyard, but also used the evenings to build a wooden boat himself. With this boat he later won regatta silver and then passed the boat on for profit. During this time, Rassy acquired the shipyard in Kungsviken. There he initially dealt with the production of individual pieces from solid wood. He named the first 35-foot serial boat Rasmus 35 . It was drawn in 1966 by the world-famous ship designer Olle Enderlein . The first two yachts had a hull made of mahogany , from 1969 glass fiber reinforced plastic was used. The Rasmus 35 featured a central cockpit protected by a windshield, a powerful engine and an aft cabin. These characteristics can be found on many Hallberg-Rassy yachts to this day. The Rasmus 35 also had a German license with the name NAB 35 .

In 1972 Christoph Rassy took over the Ellöser Werft, both the building and the company, from Harry Hallberg. The shipyard, now known as Harry Hallbergs Werftindustrie , was then renamed Hallberg-Rassy , or HR for short, as the Hallberg brand was already established on the world market. In 1973 the new company's first model, Monsun 31 , came out, which sold 904 times by 1983. In 1974 the HR 41 was presented , which was the first yacht of its kind below deck to allow an upright walk along the entire length of the boat. In 1975 the yard area was doubled. The HR 38 , presented in 1976 , was the first to wear the blue ribbon on the hull side, which is still a hallmark of Hallberg-Rassy yachts today. 802 copies of the HR 352 presented in 1977 were sold. The HR 49 , introduced in 1982, was the flagship of the range for a long time. Magnus Rassy , the son of Christoph Rassy, ​​built the Rassker , which was awarded a lot of regatta silver , at the age of 16 , whose negative stern with bathing platform and external keel already gave a glimpse into the future of Hallberg-Rassy yachts.

The 312 model with the typical blue stripe on the hull

The computer-controlled milling machine acquired in 1987 enabled previously unthinkable precision in boat construction. In the same year, Hallberg-Rassy also took over Marinplast AB , which had specialized in the lamination of boat shells . This made it possible to build a yacht in just one company. Since 1988 there has been a successful collaboration with the Argentine yacht designer German Frers , who gave the shipyard's yachts a sportier note without losing their character as pure cruising ships.

A total of over 8,900 ships have been built by Hallberg-Rassy to date. HR yachts are represented on almost every amateur sea regatta. One of the owners was Rollo Gebhard , who from 1983 to 1991 made an extensive circumnavigation (120,000 km) with his wife on the Solveig IV, a Hallberg-Rassy 42 (length 12.9 m), including a six-month non-stop trip.

Hallberg-Rassy has representative offices throughout Europe, the USA, Japan and Australia. The company has been run by Magnus Rassy in the second generation since 2003. It is 100% family owned (Rassy). The production volume is approximately 155 units per year. In 2008, some of Hallberg-Rassy's sailing yachts briefly appeared in the James Bond film Quantum of Solace .

“The Swedish shipyard Hallberg-Rassy has an international reputation when it comes to blue water sailing. In addition to the good properties under sail and engine, the reputation is based primarily on their solid construction and the high standard of equipment. "

“Hallberg-Rassy yachts are generally designed for longer trips. Circumnavigating the world, crossing the Atlantic, retirement on the yacht: this is what the high-quality but also high-priced HR boats are made for. Manufactured in small numbers and with great care, the HR yachts retain their value as few other shipyards. " 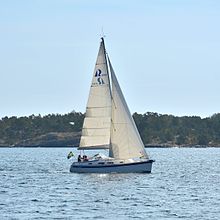 The following boats are currently available:

Boats that are no longer built are:

Hallberg-Rassy is the organizer of the annual Hallberg-Rassy regattas in Germany, Great Britain, the Netherlands, the USA (west and east coast) and, since 2004, on the Mediterranean in Punta Ala (Tuscany).