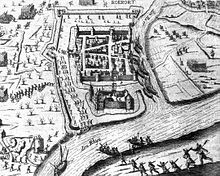 City of Ruhrort with fort 1587

Ruhrort is a district on the right bank of the Rhine in Duisburg . It is located immediately north of the confluence of the Rhine and Ruhr rivers and has 5,636 inhabitants (as of December 31, 2016). The district belongs to the city district 400 Homberg-Ruhrort-Baerl .

More than 100 years before Ruhrort was founded in 1371, Homberger Werth, now on the right bank of the Rhine, was called "Ruhr-oort". Until the end of the 13th century, the Rhine made a wide eastern loop at the site of today's Ruhrort, which was then cut off from south to north by the Rhine breakthrough. The former Homberger Werth on the left bank of the Rhine - later the Ruhrort site - as well as the Caßler Feld ( Kaßlerfeld ) had become right bank of the Rhine. The name “Ruhr-oort” most likely originates from this time, whereby “Oort”, in High German “place”, means tip and thus names the “Ruhrspitze” as a headland. The Ruhr coming from the east flowed around the Werth first both in the south and in the north, so that it remained an island. Later the main river of the Ruhr silted up north of the Werth. In spite of all the shifts in water, there was always a headland between the Ruhr and the Rhine at the mouth of the Ruhr, which was called "Ruhr-oort" or in High German as "Ruhrort". The so-called settlement could also be opposite the actual tip on the other side of the mouth.

The Klevische place was founded in 1371 on the former left and right after the Rhine breakthrough "Homberger Werth", on which the Counts of Moers established a Rhine customs post. Earlier, on April 28, 1371, Count Johann von Moers had been authorized by Emperor Charles IV in Prague by means of a document to set up a new customs office anywhere in the Moers rule . An urban settlement on the area of ​​the castle freedom quickly developed on the scale of the Ruhrort old town. The customs rights were soon pledged to the Dukes of Kleve and the Counts of the Mark . They also built the Kasteel - at that time the Ruhrort House - and fortified the place, which they were obliged to do in 1437 in order to obtain duty-free for the Ruhrort residents on the Rhine. The city charter was them because of the lack of attachment denied being. Towards the end of the 15th century, the congregation was allowed to hold its church service within its own walls, which quickly led to the construction of a small church on the Ruhrort market square. In 1551 the community converted to the Protestant faith .

Since 1551 this settlement was called a city.

Due to the Treaty of Xanten from 1614 and the Jülich-Klevische inheritance division regulated therein , which ended in a provisional division of the duchies , the areas of Kleve-Mark went to the Electors of Brandenburg .

In 1636 the order was given by the Elector of Brandenburg to completely remove the "Kasteel", which had become useless for military purposes . However, two tower stumps were preserved until the first city expansion in 1754/1756, just as the urban complex remained in its small dimensions up to this point in time. Remnants of the "Kasteel" were discovered in the cellars of Ruhrort houses at the end of the 20th century. In 1665 a boatmen's guild was established in Ruhrort , whose members were active as coal traders in the towns upstream of the Rhine.

Ruhrort became part of Prussia in 1701 . In 1712 the first shipyard was built in Ruhrort. After a decision by the magistrate, the first appropriate port was built in 1716. As the first house outside the Ruhrort city wall, the so-called Packhaus , the ancestral home of the Haniel family , was built in 1756 . In 1808 Meiderich was incorporated into Ruhrort. In 1828 Franz Haniel opened a shipyard for the construction of steamers. The city ​​of Mainz launched the first Rhine steamship there in 1830 . A warehouse building from 1862 has been preserved from this Haniel shipyard.

Since 1766 the Ruhrort harbor has been administered by the Prussian government, which ensured that the ports were purposefully expanded. In the years 1837–1842 the lock port was built, which was connected to the island port by a piercing.

Between 1860 and 1867 the north and south ports were built in Ruhrort.

In 1901 a boat exchange was set up in Ruhrort. On April 1, 1904, the Beeck mayor's office was incorporated into Ruhrort. 18 months later, on October 1, 1905, Ruhrort and Meiderich left the Ruhrort district. They were combined with Duisburg to form a large city and their ports were united by a single administration. The administration of the Ruhrort district was moved to Dinslaken and the district was renamed the Dinslaken district .

In 1924, the Rheinische Stahlwerke built their administration building in monumental brick expressionism , the Ruhrort House , also popularly known as the “Thousand Window House ”.

The 901 tram (Mülheim-Duisburg-Obermarxloh) runs through Ruhrort . It is operated by the Duisburger Verkehrsgesellschaft . The Duisburg-Ruhrort station is today the terminus of the line from Oberhausen Hauptbahnhof via Meiderich . The regional train RB 36 Ruhrort-Bahn is operated by the NordWestBahn . It took over the traffic on December 12, 2010 following a tender for the Niers-Rhein-Emscher network from the Prignitzer Eisenbahn . NWB uses LINT 41 diesel multiple units here . The average speed is 45 km / h. The Ruhrort-Bahn runs every 30 minutes on weekdays and every 60 minutes on weekends and is part of the VRR . 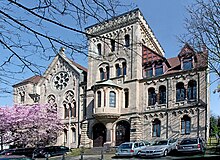 The parish, which was parish off from Halen (on the left bank of the Rhine) near Hornberg in 1489, owned a church dedicated to St. St. James church from the 14th century, became Protestant in 1551. The James Church has since the Protestant Church of the formerly independent city Ruhrort. It was rebuilt in the 1840s. In September 1990 the decision was taken to tear down the dilapidated nave. This plan was implemented until 1991. In the course of renovation work around this time, the preserved and listed classicist tower was regained its pointed helmet.

A chapel was consecrated in 1785 for the few Catholics in the old town. After the parish was raised in 1845, the construction of the parish church dedicated to St. Maximilian, the namesake of Bishop Kaspar Max, was consecrated. It is located on Fabrikstrasse.

Between the years 1898 and 1904, four Dutch-speaking communities emerged in Duisburg and Ruhrort , two of which were strictly Calvinist and two of which were moderate. From 1902 to 1903 Karl Siebold built the prayer room on Dr.-Hammacher-Straße . At that time, Dutch people looking for work settled on the Lower Rhine and in Ruhrort. The building has belonged to an architect since 2008. Since May 2013 it has been listed in the themed route 26 - Sacred Buildings on the Route of Industrial Culture . This is where the Nederlandse Kerk aan de Ruhr exists , it is primarily aimed at inland navigation .

In 1974 the Museum of German Inland Navigation was opened . It reminds of the long shipping tradition in Ruhrort. In the 1990s it was relocated to the old indoor swimming pool in the Laar district because the old building was no longer able to cope with the space requirements. The associated museum ship Oscar Huber remained in the Ruhrort harbor. There is also a privately operated radio museum in Ruhrort. The Haniel Museum shows u. a. the history of inland shipping and the Haniel shipping company .

In 2001 the Cologne artist Thomas Baumgärtel designed the facade of the house in Karlstrasse in collaboration with the master painter Dieter Siegel-Pieper. 28 in Duisburg-Ruhrort, commonly known as the "Bananenhaus".

Ruhrort is part of the route of industrial culture - Duisburg: city and port .

People associated with the place