The title of this article is ambiguous. Further meanings are listed under Hochfeld (disambiguation) .

Bridge of solidarity between Rheinhausen and Hochfeld 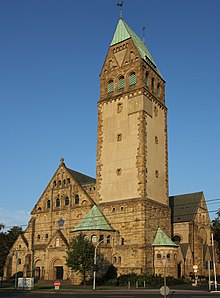 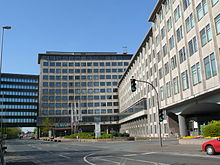 Promenade of the Rheinpark Duisburg in Duisburg-Hochfeld 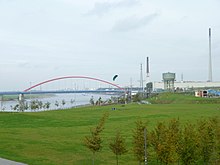 Rheinpark with a view of the Solidarity Bridge

Duisburg-Hochfeld lies on the right bank of the Rhine and is located southwest of the old town of Duisburg . It is bounded in the west by the Rhine , in the south by the Duisburg – Mönchengladbach railway line and in the east by the Dellviertel . The Rheinhausen district is on the opposite left bank of the Rhine .

The main shopping street in 47053 Duisburg-Hochfeld is Wanheimer Straße , through which the DVG (Duisburger Verkehrsgesellschaft) tram line 903 runs.

Wednesdays and Saturdays are market day at the Hochfelder Markt.

Hochfeld has a very high proportion of immigrants of various nationalities. On December 31, 2018, Hochfeld had the highest proportion of foreigners of all Duisburg districts with 58.8%. The proportion of citizens of Turkish and Turkish origin is relatively high in Duisburg-Hochfeld, which means that the shops are specially tailored to their needs. In recent years, Hochfeld, along with Laar , Meiderich , Bruckhausen and Marxloh , has also emerged as a settlement focus for immigrants from Romania and Bulgaria , especially Roma , who now make up more than 15% of Hochfeld's population.

With Hochfeld Süd, Duisburg-Hochfeld has its own train station. With the regional train , Duisburg main station with all national and international connections can be reached in just two minutes. There are continuous connections to Wesel , Oberhausen , Duisburg-Rheinhausen , Krefeld , Viersen and Mönchengladbach .

The tram line 903 of the Duisburger Verkehrsgesellschaft (DVG) runs through Duisburg-Hochfeld and runs from Duisburg- Hüttenheim via Duisburg Hauptbahnhof to Dinslaken .

There used to be a dense forest area southwest of Duisburg. The “ infirmary ” for the lepers was just a short distance from the Marientor , very close to the gallows . The Werthaus ferry crossed over to Werthausen on the banks of the Rhine . The ferry has been documented since the Middle Ages , and Werthauser Strasse still exists today.

Having plunged into high debts as a result of the Thirty Years' War in the middle of the 17th century, the city had forests cut down, sold the wood and reclaimed the resulting land. The area was called the high field , but located directly on the Rhine it was nevertheless protected from the notorious Rhine flood due to its "high" location. Even today some street names are reminiscent of old field names (e.g. Eigenstrasse, Valenkamp).

At the beginning of the 19th century, the Rhine Canal (today's outer harbor) was built and Duisburg was connected to the railway network. Together with the good road connections, this circumstance made Duisburg appear as a particularly interesting location for the beginning industrialization . Above all, it was ideal that Hochfeld, with its direct connection to the Rhine, which was not only indispensable for the important transport of goods , but also offered free water and easy disposal of wastewater. Steel producing and processing factories, suppliers and chemical companies settled on the high fields. In parallel with industry, houses were built for the workers. Since there was no precise development plan , construction was uncoordinated. Here a workers' settlement, there a few houses, sometimes on the street, sometimes in the middle of the field, often directly adjacent to the large companies. The population grew very quickly. In 1854, 1,700 people lived in Hochfeld, in 1895 there were already 18,400.

With the school vicar Bernhard Nienhaus, the first Catholic pastor came to Hochfeld in 1861. Since then, church services have been celebrated regularly at the school in Feldmark. The first Bonifatiuskirche was built in 1872 as an emergency church. The Evangelical Paulus Church followed in 1877. In 1893 the Catholic parish was raised to an independent parish. A year later, the St. Peter Church was built on Petri and Fehrbellinstrasse.

In 1866 the Rheinische Eisenbahn-Gesellschaft built its Ruhr area route south of Hochfeld, starting from the Rheinhausen – Hochfeld trajectory at today's cultural port .

Apart from the economic fluctuations, things went up until the First World War . With the outbreak of the First World War, there was initially an economic standstill. Workers were included in the military , many volunteered. The result was a rapid decline in production. Prisoners of war and women were used as cheap labor.

In 1911, the old Bonifatius Church was torn down and replaced by today's large St. Bonifatius Church at Marien Hospital (now operated by the Helios Group), which is a landmark of the district due to its striking tower.

On the outbreak of the November Revolution on 9 November 1918. followed tumultuous years. French occupation , the Ruhr Army , inflation and the global economic crisis are only mentioned here as keywords. Strikes and civil war-like conditions had severely affected the entire economy by 1925.

At the beginning of the National Socialist era , the number of unemployed fell due to the armament of the Wehrmacht . Difficult times followed with the beginning of the war. Duisburg is one of the German cities that suffered most from the air war . As a result of the air raids on the Ruhr area , residential and industrial areas were reduced to rubble and ashes from 1943 onwards. To protect against the allies advancing from the west, the Duisburg-Hochfelder railway bridge was destroyed on March 4, 1945 by the retreating German Wehrmacht itself.

After the bad years, good times came again with the reconstruction and the economic miracle in the 1950s and 1960s. The residents found work again and achieved modest prosperity . During this time, Hochfeld had up to 33,000 inhabitants. In 1952 the Augustinian monastery and the "Christ the King" church were built.

The further economic development of Hochfeld, and thus also the labor market situation, was shaped by the turbulent economic development of heavy industry on the Rhine. The weak growth of the iron producing industry led to the fact that more and more jobs were lost in Hochfeld since the early 1970s. The global economic weakness in the steel market in the 1980s led to further mass layoffs .

Due to the decline of the companies based in Hochfeld and the large-scale demolition of residential buildings and the associated greening, the number of inhabitants was reduced to around half by 1999. The old church “St. Peter “victim. The congregation found a new home on Brückenstraße, where the new St. Peter's Church was consecrated in 1969.

The entire renovation and the conversion measures taken so far have not yet been able to solve Hochfeld's problems. The unemployment continued to rise and the falling incomes declined and the quality of the transactions.

In 2000, the three Catholic parishes of Hochfeld merged to form the new parish of St. Bonifatius, which was renamed Christ the King in 2006. The church of St. Peter was given up as a parish church and converted into a social center sponsored by the parish of Liebfrauen.

After Hochfeld was included in the funding program for the “district with special renewal needs” of the state of North Rhine-Westphalia in March 2000, funds for the renewal of Hochfeld are available.

Extensive park “Böninger Park” and a smaller park near Rudolf-Schock-Strasse. Another park behind the former Thyssen site is the Rheinpark. Duisburg-Hochfeld has a number of pubs and many coffee houses and shops. The musical theater Theater am Marientor (TaM, formerly Les Misérables ) on Heerstrasse / Plessingstrasse should also be mentioned. This theater is actually in the Dellviertel (according to the official city map with administrative boundaries).

In 2002 , the Pulp , a mixture of discotheque , restaurant and beer garden, was opened in the station building of the Duisburg-Hochfeld Süd station, which is no longer used by Deutsche Bahn . The redesign took place in the style of a medieval castle. In addition to the disco with a focus on rock music at the weekend, themed events ( knight's meal , children's theater, DAT20 charts) and live performances take place.

The already partially opened Rheinpark Duisburg is currently being built in Hochfeld , which will be preceded by a relocation of the industrial companies located there today and which will again give the city of Duisburg access to the Rhine over a length of 1.4 kilometers.