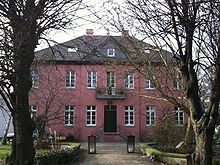 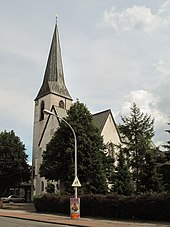 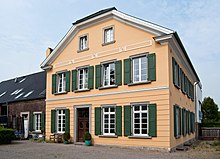 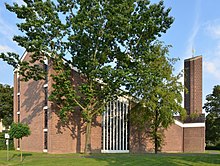 Rumeln-Kaldenhausen is located in the southwest of Duisburg, on the city limits to the city of Moers in the Wesel district (districts Schwafheim and Kapellen ) and the city of Krefeld ( Uerdingen ).

The first documentary mention of Rumeln occurs in 898 in the "Werdener Urbaren". In 1472 the Marienfelde monastery was founded, which is no longer preserved.

In 1794 Rumeln (and Kaldenhausen ) became part of the newly founded mayor of Friemersheim (until 1814 under the French rulers in the Roerdepartement ). In 1815, at the Congress of Vienna, the area of ​​the later district of Moers , and thus Rumeln, was added to Prussia .

In the course of the Prussian administrative organization, the Rheinberg district was initially formed on April 23, 1816 as one of over 40 districts in the Jülich-Kleve-Berg province  - the later Rhine province - but was merged with the Geldern district as early as 1823 . This merger was reversed in 1857. The seat of the new district was moved from Rheinberg to Moers and the name was changed accordingly to the district of Moers . At the same time, the mayor's office in Friemersheim was reclassified from the Krefeld district to the Moers district.

On July 1, 1934, Rumeln and Kaldenhausen merged to form the unofficial municipality of Rumeln, which was renamed Rumeln-Kaldenhausen with effect from August 2, 1950 . The latter was based on a submission by Kaldenhausen citizens to the British military government on November 15, 1946. The community belonged to the Moers district until 1974 .

The mayor or mayor was:

In the Rumeln area there are a few relics of the former Marienfelde monastery in the area of ​​Klosterstrasse and Marienstraße. It was founded in 1472, was destroyed in 1642 during the Thirty Years' War by ardent French and Hessian troops, but rebuilt a few years later. With the war, the residents of Rumeln and their sovereign, the Count of Moers, also became Protestant, with priority not being given to the Lutheran but the Calvinist-Protestant religion. Only Kaldenhausen remained Catholic; the denominational boundary ran approximately at the level of the Rumeln town hall in an east-west direction. The monastery continued until the secularization of the areas on the left bank of the Rhine by the French occupation troops in 1803. The building was demolished in 1891.

In Rumeln-Kaldenhausen there are currently:

The coat of arms, which the municipality had on January 28, 1958, on the basis of a permit from the Minister of the Interior of North Rhine-Westphalia, symbolizes the union of the two former individual municipalities of Rumeln and Kaldenhausen to form the municipality of Rumeln-Kaldenhausen. The southern part with the town of Kaldenhausen was under the Archdiocese of Cologne , hence the black cross in silver, while the northern part with the town of Rumeln belonged to the glory of Friemersheim , from whose coat of arms the three silver roses in blue were taken. The glory of Friemersheim fell to the Counts of Moers at the end of the 14th century . The coat of arms can still be found today (alongside that of the other cities incorporated in Duisburg in 1975) as a glass mosaic in the Lower Rhine window of the Duisburg town hall on Burgplatz. It also adorns the head arches of Rumeln-Kaldenhaus clubs.

There are several kindergartens: the Evangelical Kindergarten (Kirchstraße), the Catholic kindergartens St. Marien (Dorfstraße) and St. Klara (Böschhof) as well as a municipal kindergarten (Düsseldorfer Straße). Rumeln-Kaldenhausen has three primary schools (Marienfeldschule, Gerhart-Hauptmann-Schule and the community primary school Gartenstrasse (Donkschule)) and one secondary school: the Albert-Einstein-Gymnasium (AEG). Until 2014 there was the community secondary school Schulallee (GHS Schulallee) and until 2010, the Friedrich-Fröbel-Schule, a special needs school for the mentally disabled, in Kaldenhausen. It is now in neighboring Rheinhausen.

The district became known in terms of sport through the women's soccer team of FC Rumeln-Kaldenhausen, which initially renamed itself FCR Duisburg in 1955, before the soccer players split off under the name FCR 2001 Duisburg . The highlights were winning the DFB Cup (1998, 2009 and 2010), the German championship (2000) and winning the UEFA Women's Cup (2009). The FCR is now based on the right bank of the Rhine in the southern district of Hüttenheim . The largest sports club is Rumelner TV (RTV) with around 3,000 members in 8 departments. The currently highest-ranking team also comes from the ranks of the RTV: the volleyball players have been playing in the second volleyball league since the 2011/12 season .

The water ski facility at Toeppersee on the border with Rheinhausen is also of great sporting importance for the district . The new swimming pool was also built there. The indoor pool in Rumeln-Kaldenhausen was closed due to dilapidation.

Rumeln-Kaldenhausen - like Rheinhausen as a whole - is located in the Lower Franconian dialect north of the so-called Uerdinger line , which stretches from the Rhine via Kempen to Venlo. This dialect line (also called ek-ech border) separates the southern Lower Franconian (which is spoken in Uerdingen and Krefeld, for example, with the pronunciation of “esch” for the personal pronoun “I”) from the northern Lower Franconian Platt, which is in the Krefeld district Hüls (see Hölsch Plott ) begins and is (or was) spoken in different variants throughout the northern Lower Rhine - with the pronunciation of “ek” instead of “I”.

The Rheinhausen dialects are very much influenced by the Moers “Grafschafter Platt”, but differ from one another in the individual districts. There are also clear differences between the dialects of Rumeln and Kaldenhausen (which is already tending towards “Oedingsch Platt”).

However, the dialect is rapidly disappearing and is hardly understood by the younger generation. Instead, a “new” colloquial language prevails, the so-called “Lower Rhine German”, called “Regiolekt” by linguists. Although it is based on Standard German, it has special characteristics due to the inclusion of expressions from immigrants or buzzwords from the youth language. The miner's language has also left its mark on everyday language. Many people are familiar with the saying of: “... but hate food sack on it!” (The expression food sack indicates that something “went wrong.” It comes from the time when pit horses were still working underground when conditions were difficult with the "Feed sack" were immobilized.)

In Rumeln there was a material and ropeway shaft from 1936 to 1973 and a moving weather shaft in Kaldenhausen from 1959 to 1973. Both belonged to the Fritz mine field , which in turn belonged to the Wilhelmine Mevissen mine . The owner was Alfred Krupp , who bought Ferdinand Stein's shares around 1870. The granddaughter Bertha Krupp brought this into a union Fritz (100 Kuxe) in 1903, which was formed with the participation of Friedrich Krupp AG . The systems were dismantled after the shutdown. 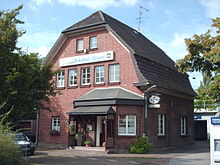 Former station building, then a bakery, currently empty below

Rumeln-Kaldenhausen has the breakpoint Rumeln on which the rail passenger transport daily every hour from Duisburg Central to Xanten and Monday to Friday every 30 minutes from Duisburg to Moers , the regional train "The Lower Rhine" (RB 31) operates. Since the timetable change on December 13, 2009, the local rail passenger transport has been carried out by the NordWestBahn (NWB) with diesel multiple units of the LINT 41 type in single and double traction.

Kaldenhausen station was a small crossing station on the former Uerdingen - Trompet - Baerl railway with two switches, two station tracks and up to six main signals. It was put into operation in 1880 and served passenger traffic until May 25, 1961. Since the entire line was closed on October 1, 1961 ( Bayer AG acquired the closed line south of Kaldenhausen station in order to enlarge the factory premises), the tracks were also quickly dismantled.

The bus routes 923 and 924 and the express bus SB42 are currently also running via Rheinhausen and Hochfeld to Duisburg-Mitte. Due to political differences between Moers and Duisburg, the SB 42 currently ends and begins at the "An der Coelve" stop, as the bridge of the same name is currently only available for pedestrians and cyclists. Line 923 continues from Duisburg-Mitte via Kalkweg (MSV-Arena, Wedau Sports School) to Wedau Kliniken (Duisburg Clinic) and line 924 continues to the University of Duisburg-Essen (North). The express bus line SB 80 runs on the left bank of the Rhine from Krefeld - Uerdingen via Rumeln to Moers . All lines stop at the Rumeln Markt stop, line 923 also serves the Rumeln train station. The NIAG bus line 3 coming from Moers-Kapellen ends at the Kaldenhausen-Krölls stop (transition to lines 923/924).