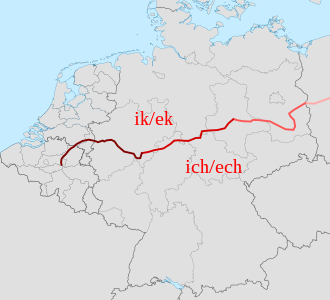 The Uerdinger and Karlsruhe lines as historical language borders between Low and Middle German .

The Uerdinger line or ik-ich-Linie describes the ik / ich - isogloss in German studies . Minor forms are ek and ech .

To the north of this isogloss one says, for example: “Ik goh noh Hus” and south of it the High German “ich” or the dialectal “ech”, “esch” or “isch” is part of the dialect, there one speaks: “Isch jon noh Huus ” for“ I'm going home ”.

The Uerdinger line separates u. a. the North Lower Franconian from the South Lower Franconian . It stretches from the Belgian Lion over the Dutch Roermond , Venlo and Viersen , crosses the Rhine between Krefeld-Uerdingen and Duisburg-Mündelheim , runs north of Mintard along the Ruhr, continues through the Bergisches Land and meets the Benrath line again near Wuppertal or "make / make line". Essentially, it describes, among other things, the course of the border between Siegerland and Sauerland , where it assigns part of the municipality of Wenden to the more southern language area and here briefly separates from the Benrath line (so they say: "ech make"). Further east in Brandenburg, it separates again from the Benrath Line and runs south past Berlin. There they say: "i (c) k do".

The Uerdingen line runs through the urban area of ​​Krefeld, where the Hölsch Plott spoken in the Hüls district is already part of the North Lower Franconian “ik / eck” language area, while “esch / isch” is used in Uerdingen and the other districts. The Uerdinger line also separates Duisburg's southern district , which belongs to the “esch / isch” language area, from the rest of the city area.

In the first case, the dialects south of the Uerdinger line can also be assigned to the Central German languages ​​and dialects of High German, in the latter case to Lower Franconian (see also Panninger line ).