A Lädine or Ledine is a historical cargo sailing ship that was used as a type of ship between the 14th and 20th centuries for about 500 years in Lake Constance shipping . The Lädine is similar in type to other cargo sailing ships that were common on Central European inland waters. The smaller version of the Lädine is called Segmer or Segner .

The construction of a shop

In 1764 there were about a thousand cargo sailors on Lake Constance , 150 of them Lädinen, the number of which had shrunk to 60 to 70 by 1824. At the turn of the century only a few sailed. Some were fitted with 5-horsepower petrol engines or towed by steamers. Most of them were demolished and firewood, like the last original shop in Bodman in 1952 .

As a means of transport, in the age of carters with bullock carts and horses, cargo shipping had several advantages over overland transport, namely being faster, cheaper and more reliable. Today, in the age of trucks and highways, this only applies to so-called bulk goods if the start and end point of transport via waterways can be reached by barge.

In accordance with the state of the art at the time, bulky, flat wooden one-masted barges were used, which could sail in front of the wind with a huge square sail. When the wind was calm, you either had to row, trek or stake on the bank to get to your destination. Headwind meant waiting in port because cruising without a keel was not possible. In the historical sources there are often complaints about violations of the Christian Sunday rest, because it was preferred to use the available wind rather than laborious and tedious rowing or pegging. With the bucket bow it was possible to load and unload the ship on the bank away from the harbors.

Using the example of Lake Constance can be said that there valuable edible salt loads from Bavaria were shipped to the west, building materials and agricultural products from the other neighboring places of the lake in the opposite direction. In a stiff breeze, it took a Lädine about eight to ten hours to travel the 63 kilometers along Lake Constance. Furthermore, grain and barrels with wine are known as historical transport goods. Regarding the transport of wine, it is reported that the crew typically also received wine as a reward , so that a seat on the crew was highly coveted on such a trip and was already consumed in kind on the outward journey.

In Lake Constance there are several well-preserved wrecks of sunken Lädinen. Two are easily accessible for recreational divers . One is in front of Wiedehorn near Egnach, the other in front of Ludwigshafen . The latter is one of the exhibits at the Underwater Museum .

A historical Lädine (more precisely: Segmer) was rebuilt by the Lädinen-Verein Bodensee eV with its headquarters and home port in Immenstaad and put into service on May 9, 1999. Since then, the 17-meter-long and 20-ton square-rigged ship has been regularly making tours out onto Lake Constance and also takes paying guests with it. For sudden calm and other emergencies, the ship is equipped with a 120 hp diesel engine. The Immenstaader Lädine is one of the most eye-catching and largest sailing boats among the 55,000 or so ships that are officially licensed on Lake Constance. Half a dozen members of the association have already acquired the captain's license required for command of the ship . For this, one hundred hours of practical experience had to be proven on board. Furthermore, exams in navigation and meteorology had to be taken. In the first decade there were 70,000 passengers who got on the replica cargo ship. 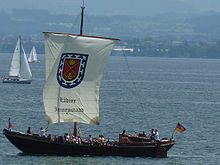