This article deals with the back of the body part, for other meanings see Back (disambiguation) .

Partial view of a back

The back ( Latin dorsum , Old High German  hrukki , old Indian krúñcati 'curved') is the rear side of the torso of humans or animals , which extends from the lower edge of the neck to the area of ​​the loin or to the tip of the coccyx . 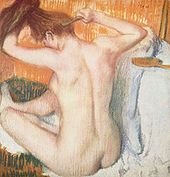 Back of a Woman by Edgar Degas .

The back is formed by the spine , the posterior sections of the ribs and the soft tissues above and next to them; Colloquially, the two overlying shoulder blades of the shoulder girdle are also often included. In the midline of the back there is a clear furrow in which the spine with the spinous processes can be felt and seen, bounded on both sides by a muscular bulge. These long extensor muscles of the back are part of the local (autochthonous) back muscles , which are divided into five sub-systems of muscle groups in different directions. Together, they serve to rotate, bend sideways, stretch, straighten and keep the spine upright and are collectively referred to as the (lateral and medial tract of the) erector spinae muscle . In addition to these, the back muscles include other muscles that are particularly involved in raising and lowering the ribs and in movements of the upper arm , shoulder , cervical vertebrae and head .

Widespread deformations of the back are bending and tilting, which are often associated with tension in the shoulders or neck. Often they are a consequence of one-sided posture , especially during prolonged sitting or screen work without changing position, or even in unfavorable sleeping positions. But the hunchback and the formerly frequent humpback still occur.

Back and gluteal muscles

In addition to the muscle groups, the back muscles include the

Commons : Human Back  - Collection of images, videos and audio files