This article deals with the arm as a human extremity, more word meanings under arm (disambiguation) . 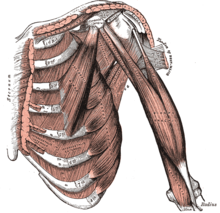 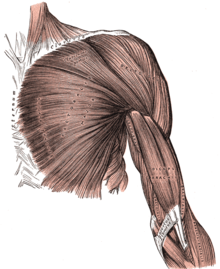 Arm muscles, view from behind (back)

Cut through the arm

The human arm - also known as the (free) upper extremity in medical jargon - is the transformation / further development of the animal's forelegs into a gripping tool , but with its pendulum movements it also serves to balance the upright gait .

The arm ( membrum superius ) is divided into:

The upper extremity of the human being has the greatest possible freedom of movement of all parts of the body, which determine their functionality through the mobility of the shoulder joint, the elbow joint, the forearm bones to one another, the wrist and subsequently the carpal and finger joints .

Movements in the shoulder joint

Movements in the elbow joint and forearm

Movements in the wrist

As movements in the wrist are dorsal and palmar flexion and ulnar and radial abduction to call.

Movements of the finger joints

Flexion, extension, adduction and abduction of all fingers and opposition and apposition of only the thumb.

A “long arm” is a powerful influence of an institution, a person or other influencing factors, which occasionally acts in the background and which is exerted over greater distances of time and space, e.g. B.