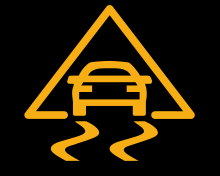 The term dynamics control ESC ( E lectronic S tability C ontrol), Electronic in German stability control, often in German-speaking countries with "ESP" for E lektronisches S tabilitäts P abbreviated rogram called an electronically controlled driver assistance system for motor vehicles , the individual by braking wheels counteracts the breakaway of the car. The current version of ESC is an extension and connection of the anti-lock braking system (ABS) with traction control (ASR) and electronic brake force distribution as well as with a brake assistant , in trucks with the electronic brake system .

Since 2014, all newly registered cars and trucks in the EU must be equipped with ESC.

The term ESC (Electronic Stability Control) or vehicle dynamics control is used for the system in vendor-neutral specialist groups.

This driver assistance system tries to prevent the vehicle from skidding in the limit area in bends, both when oversteering and when understeering , by means of targeted braking of individual wheels and thus secures control of the vehicle for the driver.

So that ESP can react to critical driving situations, the system continuously (up to 150 times per second) compares the driver's request with the driving situation. The steering angle sensor provides the driver's request with regard to the direction of travel. Engine management, the ABS speed sensors and the yaw rate sensor ( yaw rate , lateral acceleration ) provide the vehicle behavior data. Another acceleration sensor in newer systems also detects a rotation in the longitudinal axis of the car (rollover). If a significant deviation of the calculated driving state from the driver's request is detected, the system intervenes. Oversteering is corrected by braking the front wheel on the outside of the bend, and understeering is corrected by braking the rear wheel on the inside of the bend. The wheel position plays a double role: On the one hand, the braking force on the inside of the curve generates a yaw moment that supports turning, and vice versa. On the other hand, a braked wheel loses cornering ability, i. H. Braking force on the rear axle supports turning, and vice versa. Unilateral braking interventions on the front axle can be felt on the steering wheel. This effect can be interpreted as a reduction in comfort, which is why some manufacturers only allow the front axle to intervene if the correction on the rear axle proves to be insufficiently effective.

In addition, ESP can also throttle the engine output to reduce the vehicle speed and prevent the drive wheels from spinning. Right from the start, the ESP systems were also connected to traction control, which brakes a spinning drive wheel and thus shifts the drive torque to the other wheel. In addition to the additional sensors (see above), the ESP requires the separation of all wheel brake circuits so that each wheel can be braked individually.

There are only a few special cases in which ESP occasionally "interferes". This includes driving with snow chains , on steep, snow-covered inclines (because the required high slip is not permitted ), in banked turns (on racetracks), deliberate drifting in curves, rapid acceleration and generally deliberate driving in the limit area. Here the driver notices, for example, a throttling of the engine output. In addition, ESP is also suitable for correcting weaknesses in chassis design and tuning.

For these reasons, the activation threshold depends on the brand and product philosophy of the respective manufacturer, for example a somewhat later activation at Porsche. In addition, ESP can be switched off at many manufacturers. For some, however, it reactivates when the brake pedal is pushed to the limit. If that happens, the ESP regulates the vehicle until it is stable and then switches off again. This cannot be seen visually inside the vehicle, but it can be felt in the form of a "jerk". For others, the activation threshold can only be shifted from early / cautious to late / sporty via a switch. The mechanisms are partially undocumented.

The time of intervention and the degree of intervention of the CST (or ESP) can be set in several stages or switched off completely using the so-called Manettino (German: lever ), a small rotary knob on the steering wheel.

Since ESP and ABS functions work together both via the electronic control and mechanical subsystems, the system can no longer be deactivated by pulling a fuse without reducing the braking system to emergency functions.

Example of a driving situation

A car is turning to the right. If the rear end threatens to break out to the left due to a load change reaction , due to the vehicle rocking after a rapid change in the steering angle, due to a strong increase in power in rear-wheel drive vehicles (power oversteer), due to a technical defect (e.g. bursting a rear tire) or due to a change in the coefficient of friction in the curve the ESP brakes the front left wheel. This creates a yaw moment to the left which counteracts the oversteering of the vehicle. The front left wheel and thus the front axle also lose cornering force due to the braking (see Kamm circle ), which additionally weakens the turning moment and thus the oversteering of the vehicle.

Even before the introduction of ESP, there were control systems that stabilized the vehicle in certain situations. With ABS vehicles were at full braking steerable, with the ABS ASR expansion was primarily in rear-wheel drive vehicles, a stability advantage.

The ESP was developed by the German inventors Anton van Zanten and Armin Müller .

Integrated vehicle dynamics management is the second development stage in vehicle dynamics control. While a conventional electronic stability system ensures more stability in critical driving situations through targeted braking intervention on individual wheels, the integrated driving dynamics management goes one step further. Electronic brake force distribution, traction control and the power of the electric power steering are also taken into account, as are the adjustment options for the variable steering ratio or the active chassis . The introduction in Germany happened in 2005 in the Lexus GS (Vehicle Dynamics Integrated Management VDIM).

The following additional functions of the ESP are not available in all vehicles and depend on the version of the ESP:

The challenge in the configuration is to also prevent the vehicle from not moving at all in unfavorable conditions (mirror-smooth road surface, deep snow) due to the ASR.

The following parts of this article appear since 2010 is out of date to be : statistics - Laber □ Disk 05:49, 17 July 2016 (UTC).
Please help with to the missing information research and insert .

As the statistics show, the equipment rate in the lower vehicle classes is lower than in the upper class due to cost reasons, although it is precisely these vehicles that can particularly benefit from ESP due to their low mass moment of inertia. In February 2006 the VDA issued a recommendation for all German automobile manufacturers to commit themselves to standard equipment of ESP in all vehicles, since the advantages of this system in normal everyday operation do not conflict with any disadvantages. According to Bosch, Germany takes the top position for ESP equipment within Europe. Competitors are Continental and for some time also TRW . In the case of buses, the equipping quota for new registrations (March 2005) is around 50%, whereas for trucks it is only 5%. This is mainly due to the greater complexity of the system in commercial vehicles and thus significantly higher costs.

Although it is difficult to evaluate the data on traffic accidents accordingly, the reduction in many serious traffic accidents ( active safety ) in recent years is also attributed to the introduction of ESP. ESP prevents vehicles from skidding, a major cause of accidents with seriously injured and fatalities. A study by Mercedes has shown that the accidents in their cars have decreased by 15% since they were fitted with ESP as standard. According to a study by Volkswagen, the number of vehicle occupants killed in road accidents could be reduced by around 25% if all vehicles were equipped with ESP. ESP is seen by accident researchers as being comparable to seat belts and airbags in terms of safety. The UDV investigations have shown that 25 percent of car accidents with personal injury and at least 35 percent of car accidents with fatalities could be positively influenced by ESP. If one relates these findings to the car / car and car single accidents of the official statistics for 2007, then in Germany - taking into account the fact that in 2007 already 36% of all cars were equipped with ESP - around 21,000 corresponding accidents with injuries and approx. 400 accidents with fatalities can be avoided or at least mitigated in their consequences by ESP.

According to a resolution by the European Parliament on March 10, 2009, since November 2011 all newly registered car and truck models in the EU must be equipped with ESP as standard. A transition period from already granted vehicle type approvals applied until the end of October 2014.