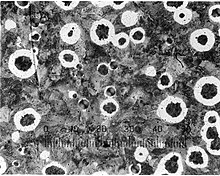 The shape of the graphite is influenced by treating the melt with magnesium . The chemical composition of the GJS is usually in the following range:

The basic mass can consist of ferrite to pearlite , depending on its chemical analysis . The structure of the metallic matrix is ​​the same as that of steel and can also be heat treated. Through heat treatment such as hardening , annealing, etc. the properties of the material can be changed.

The first reports of the use of GJS-like alloys come from excavations in China. Here GJS was used for the production of agricultural tools more than 2000 years ago.

In modern history it is not until 1939 that Dr. Carl Adey at the foundry institute of the RWTH Aachen University succeeded in making cast iron with spheroidal graphite by melting in highly basic crucibles . Almost at the same time, Dr. Morrogh at BCIRA (British Cast Iron Research Association) in England with the addition of cerium in the iron melt . However, it was only the chance discovery of Keith Millis at INCO in the USA in 1942 about the effectiveness of the treatment of molten iron with magnesium in the form of a master alloy with nickel that made industrial production possible. Nevertheless, it took until 1948 for the first industrial production of the GJS at Ford Motor Company (crankshafts) to begin. The use of the GJS was inhibited by high license fees to INCO. It was not until the development of ferro-silicon-magnesium master alloy in Germany in the mid-1950s that GJS could be manufactured economically.

In the following years, many other treatment processes were developed and several hundred process patents were registered. In addition to master alloys, there are also processes in which metallic magnesium is added directly to the melt. There are z. B. Treatment under increased pressure ( autoclave ), Fischer converter, magnesium powder in steel sheathed wire and many other variants. Approx. 40–50% of the GJS is currently produced with the addition of metallic magnesium.

In 2003 around 15 million tons of GJS castings were produced worldwide. Of this, around 4 million tons per year were used for the manufacture of cast iron pipes.

GJS castings are produced in foundries. Steel scrap, pig iron, ferrosilicon and additives such as lime, coke , quartz , crushed stone and the like are used as raw materials . used. These feedstocks are usually charged and melted either in an electric furnace ( induction furnace , electric arc furnace ) or cupola furnace . During the melting process, the chemical analysis of the melt is adjusted as required by adding alloys ( ferrosilicon , ferromanganese , nickel , carburizing agents, etc.). The tapping temperature of the melt is between 1480 and 1540 ° C. Substances or elements that make the formation of spheroidal graphite difficult or even impossible can get into the melt through the feedstock. Typical interfering elements are lead , arsenic , antimony , chromium , sulfur and phosphorus . If the sulfur content in the base melt is too high for the selected magnesium treatment, desulfurization must be carried out. The sulfur content in the base melt should not be higher than 0.025% for treatment with master alloys . The melt, freed from the slag, is then transferred from the furnace into a treatment vessel (treatment pan). The melt is then treated either with a magnesium master alloy or with metallic magnesium. Since magnesium is a very reactive metal and the vapor pressure reaches up to 10 bar at the treatment temperature  , the reaction is accompanied by light and smoke. The final magnesium content in the casting is between 0.030 and 0.060%.

The melt treated with magnesium is then poured into the casting molds using a pouring device (pouring ladle, pouring furnace). The properties of the melt must be controlled by inoculating the melt before or during casting . The inoculation promotes the crystallization nuclei, which are absolutely necessary for the formation of spheroidal graphite, and the formation of cementite is suppressed. To increase the strength in the edge area of ​​thick-walled pieces - such as B. rollers - the casting may like the chill casting made in molds.

The mechanical properties are determined by the European standard EN 1563 (replacement for DIN standard DIN 1693). The designation GGG introduced in DIN 1693 for cast iron with spheroidal graphite is still common in practice. The new designation according to EN 1563 is now EN-GJS-xxx. The following types are mentioned:

The values ​​listed here (separately cast test pieces) are only an extract from the standard, more detailed information can be found in the current standard text. Cast iron with vermicular graphite (GJV) is specified according to VDG data sheet W50. Bainitic cast iron with spheroidal graphite (ADI) is standardized in EN 1564.

The machinability of GJL is considered good and hardly causes any problems.

Because of the excellent mechanical properties, the relatively inexpensive manufacturability and good machinability, cast iron with spheroidal graphite is widely used in industry. Of the 15 million t / year (for comparison 37 million t / year GJL, 6.3 million t / year cast steel and 0.9 million t / year malleable cast iron ), around 30% are used for the production of Tubes used in the centrifugal casting process with diameters from 60 to 2400 mm. The scope extends to water and gas pipes. It can also be used for vacuum lines. Furthermore, pipes made of ductile cast iron are used as pressure lines or for lines in difficult terrain and with higher loads. Cast iron pipes laid underground must be given external and internal corrosion protection .

Around 45 to 50% is used in the manufacture of cast parts for the automotive industry. Numerous vehicle parts that were previously made of cast steel or forged steel and welded are replaced by much more economical cast parts made of GJS. In particular, so-called safety parts such as crankshafts , camshafts , connecting rods , space links, wheel hubs, truck wheel stars, axle bridges, swivel bearings, etc. are made from GJS.

Castor and Pollux containers for the transport and final storage of radioactive material are largely made of GJS.

For future high-temperature reactors (HTR), prestressed vessels made of cast steel or nodular cast iron are being considered as reactor pressure vessels .