Combined transport (short KV ) describes a multi-link transportation chain , the different modes of transport integrated. This form of organization is also known as broken traffic and is used both for the transport of people and for the transport of goods . In contrast to direct traffic (uninterrupted traffic), combined traffic involves (multiple) transfers or transfers of people or goods. Examples of split transport in the passenger transport sector can be found especially in public transport - transport associations . Combined cargo traffic (KLV) and container traffic are well-known examples of goods transport . 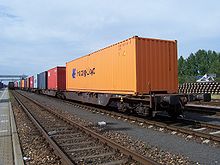 The term combined transport is often equated with the terms multimodal and intermodal transport . This approach falls short, especially for freight transport, and the European Conference of Transport Ministers therefore introduced a definition (not generally recognized):

Combined transport is intermodal transport in which the majority of the distance covered is covered by rail, inland or sea ​​shipping and the pre- and post-carriage on the road is kept as short as possible.

Combined transport can therefore be carried out if standardized loading units are used as transport containers. The dimensions and technical characteristics of the transport containers must be designed in such a way that they can be reloaded easily and that various modes of transport can be used without problems. These standardized loading units are mainly containers, swap bodies or semi-trailers . A special case is the so-called piggyback traffic or the “ Rollende Landstrasse ” (RoLA); whole trucks are loaded here

Accompanied combined transport (also: piggyback transport) stands for the sub-area in which articulated and articulated trucks are transported using ships ( RoRo method ) or trains ( rolling country roads ). In rail transport this particular are low-floor wagons used and drivers traveling in a couchette with.

In unaccompanied combined transport (also: container transport) only the cargo units are handled without accompanying motor vehicles. These include containers , swap bodies and semitrailers . The loading process takes place at terminals, which are generally located in freight centers , sea or inland ports . This unaccompanied area makes up the greater part of combined transport.

Combined transport is used to make optimal use of the strengths of different modes of transport. For example, rail, inland waterway and ocean shipping can only be used economically from relatively long distances and high freight traffic . They are therefore well suited for combination with truck traffic, which is flexible in terms of time and location and takes on the small-scale distribution (pre- and post-carriage on the road).

Political funding in Germany is based on the opportunities that CT offers when it comes to shifting freight traffic from the road to more environmentally friendly modes of transport such as rail and shipping and to relieve congested transport routes (especially roads). In addition to regulatory relief (increased maximum truck weight of 44 tonnes, exceptions to Sunday, public holiday or holiday driving bans, exemption from vehicle tax for vehicles used exclusively for pre- and post -carriage ), there is financial subsidy, particularly in the area of ​​the construction of freight traffic centers ( Transshipment terminals) by the federal government and the EU ( TEN grants ). On January 1, 2017, the funding for handling facilities for combined transport was extended for the third time. 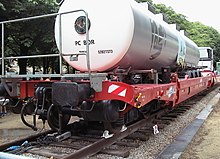 As early as 1956, Kögel built a swap body for the DB consisting of a flatbed and tarpaulin body with a gable roof, which could be hydraulically transferred from a semi-trailer to a flat rail car next to it, which was also equipped with cross rails.

In addition to the classic combined transport of container handling on flat wagons and rolling country roads, there are a number of developments that are intended to accelerate and simplify the loading process.

For the loading of semitrailers using cranes and industrial trucks , semitrailers have been developed that can be lifted onto the pocket wagons using a tong handler . However, these semi-trailers have to meet increased strength requirements. The Rail Cargo Austria improved this method with the system ISU (Innovative semitrailer envelope). With these, the kingpins and the rear wheels of the semi-trailer are used as points of application of the crane gear . Due to their road use, these already meet the strength requirements.

Mobile truck being loaded onto an eight-axle wagon

A major disadvantage of the Rolling Highway is its serial loading. For this reason, various systems have been developed in which the wagons can be loaded in parallel. Special pocket wagons are used in which the pockets can be pivoted. Thus, in can CargoBeamer the bag are shifted horizontally outwardly and the trailer directly up in parallel and without further aids and can be unloaded. Modalohr represents a similar system . Here the bag of the cart is swiveled to the side for loading. As a prerequisite for these systems, the terminal must be designed so that level access to the car pockets is possible. By lowering the wagon pocket to floor level, the maintenance of a track that is lowered from street level can be avoided. This is achieved in the “Megaswing” system, for example. Alternatively, as with the Flexiwaggon system, the difference in level between the wagon pocket and the road can also be overcome via the loading ramp .

Various developments are also being advanced in classic container loading, such as the KV scooter (formerly Mobiler ), in which, similar to the CargoBeamer, the truck is parallel to the train and pushes the container onto the train using special devices. This means that a container crane is unnecessary. The system remains compatible with this crane technology. The roll-off container transport system (ACTS) has established itself as a further possibility , in which a container can be loaded and unloaded onto the railway wagon via a laterally pivoting rolling device.

By means of side-loading (Fig: ISO container handling means BOXmover page loader carriage Trang DB) ISO containers can at sidings are folded parallel to the track between the truck and carriage. By placing the foot on the wagon, no adaptations to the wagon or loading unit are necessary.

To ensure compliance with the vehicle gauge, the Union Internationale des sociétés de transport combiné Rail-Route (UIRR) has therefore developed a profile code for uniformly identifying the loading units. In this, the combination of width and corner height of the loading unit is codified. The profile code consists of a letter as the wagon identification code in conjunction with two or three digits:

The profile code must be written on all loading units approved for rail traffic on both sides by means of a code number plate. The code number plate also shows the nationality of the Kombiverkehrsgesellschaft, the number of the road transport company at this Kombiverkehrsgesellschaft, and the serial number of the loading unit. Only ISO containers do not receive a profile code, as their dimensions are already standardized.