The Karlsruhe Rhine Port , photographed from the space station ISS from 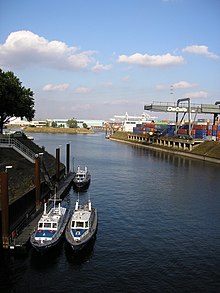 An inland port is a port inside a land mass on an inland waterway or lake . It is mainly used by inland vessels , but depending on its length, width and draft , it can also be called at and used by coasters and smaller ocean-going vessels .

Inland ports, like ports in general, can be distinguished according to their purpose:

A distinction is also made according to operator:

Inland ports are located on navigable waters inside a land mass. These can be inland waterways, i.e. larger rivers and canals, or inland lakes. In addition, the location of an inland port mostly results from its intended use.

Canals are built especially for commercial ports in order to open up areas without connection to the waterway network by shipping in the future.

Factory port in Emmerich am Rhein

Factory ports are usually located on the premises of an industrial company or in its immediate vicinity. They are used to supply raw materials or to ship products.

Inland ports generally provide places for ships to moor. It consists in particular of docks as well as quays and jetties. Usually there is also a connection to the public road network. In addition, the infrastructure depends on the type of port in question.

Commercial ports provide ships with the infrastructure to handle, store and forward their freight. A distinction is usually made according to the type of goods.

Commercial ports are usually connected to other traffic routes such as road traffic, rail traffic, air traffic and pipeline networks for the onward transport of goods . If the goods are not transferred directly to another means of transport, they can be temporarily stored in the port. Depending on the type of goods, this happens in tank farms , silos or warehouses , also known as storage facilities, or in the case of goods that are not sensitive to the weather, such as containers, outdoors.

Ports charge mooring fees, see Demurrage and, if applicable, fees for other services. In Germany, the regulation on loading and unloading times and demurrage in inland shipping (BinSchLV) applies to the remuneration . 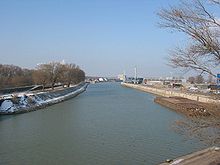 The Duisburg-Ruhrorter ports are considered the largest European inland port. It also functions as a seaport through regular connections with European sea and inland ports by means of river-going seagoing vessels . More than 53 million tonnes of goods were handled by ship in 2016, including private factory ports. Some distance behind, the next largest German inland ports are the Cologne ports (15.6 million). Total throughput including rail and road traffic in 2016 was 133.1 million tons.

In comparison, the inland waterway traffic in the German seaports was 12.2 million tons in the Port of Hamburg and 5.9 million in the ports of Bremen / Bremerhaven (both in 2008).

Inland ports in Germany (in brackets the waterside cargo handling in millions of tons):

The largest inland ports in China are on the Yangtze .