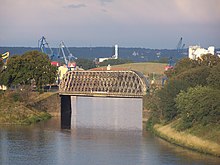 Harbor entrance with the harbor bridge

Alberthafen on an aerial photo

The Alberthafen Dresden-Friedrichstadt is the most important port in Dresden . It was built from 1891 to 1895 and is located in Dresden Ostragehege (which for the Friedrichstadt district is one) on the Elbe near the Flügelwegbrücke and the Municipal Livestock and slaughterhouse by Hans Erlwein (now Messe Dresden ).

The port area encompasses a total of 42 ha. The port basin was originally 1100 meters long and 150 meters wide and thus had an area of ​​15 ha. As part of renovation measures, the port basin was significantly reduced in 1997 - the northern and western parts of the basin were filled in to create space for additional commercial and logistics facilities. Today the basin is only about 7 hectares in size. The harbor basin consists of three parts: the harbor entrance, a turning basin and the actual rectangular main basin with north and south quays. The harbor basin has an average width of 75 m. The north quay is 730 m long, the south quay is 1000 m long. The turning basin has a diameter of 105 m.

The port has space for 20 ships. The harbor bridge , an iron framework construction, spans its entrance. Seven crane systems are available in the port for handling bulk, general cargo, heavy goods and containers. The maximum load capacity is 90 t. Unit weights over 90 t are handled with mobile cranes.

In the northeast of the site is the historic terminal, which is well worth seeing and where the original size of the harbor basin can be seen. The remaining part of the basin is the former northeast corner of the harbor basin, which today has no connection to the Elbe. The ensemble of the museum terminal, consisting of two historic railway wagons (built in 1910), a harbor crane (built in 1965) and the last Elbzille "Waltraut" (1913), can not only be admired from the terrace of the Fischhaus Alberthafen restaurant . Inside the barge “Waltraut” the living conditions of Elbe boatmen and the history of the inland ports on the Upper Elbe are presented.

The port is connected to the freight transport center at Dresden-Friedrichstadt station via the Dresden port railway and has a trimodal terminal . The port is reserved exclusively for freight traffic. There is a possibility for sport boats to moor in the Pieschener Hafen .

Between 2006 and 2007, a new roll-on-roll-off system was built near the Flügelwegbrücke, which enables loaded trucks to drive directly onto ships.

The port is operated by Sächsische Binnenhäfen Oberelbe GmbH (SBO), which also operates the ports in Roßlau , Riesa , Torgau , Děčín and Lovosice . In 2014, 2.85 million tons of goods were handled in these ports, with sales of around EUR 20 million.

The Dresden mill is located next to the port area .