This article covers the dessert; for the children's and youth theater of the same name see Theater Rote Grütze . 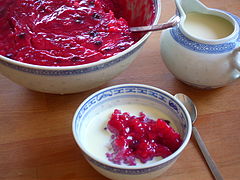 Rote Grütze is a sweet dish used in German and Scandinavian national kitchens . The name is derived from the typical red color due to the fruits used. “ Grits ” refers to the use of crushed starchy ingredients that give it its typical consistency. In the case of other fruits, the name is changed accordingly to yellow jelly or green jelly . 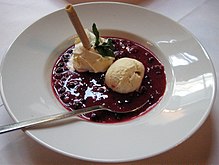 Older sources indicate that the juice of red fruits such as currants and raspberries is boiled with water or red wine and semolina to form a grits. If rice flour is used, the dish is also known as red rice flour pudding .

For the classic preparation, you boil currants and raspberries with water and pass them through a sieve. Depending on the recipe, the mass is seasoned with sugar , lemon , vanilla , wine or spirits . Starch from wheat , maize , potatoes , rice or sago is used for binding . The traditional preparation with semolina or buckwheat flour is also common, whereby this serves to bind and should not make the dish mushy .

Often, some of the fruits used are not cooked at the same time, but finally lifted under the groats. Are common for strawberries or sour or sweet cherries , but there are also combinations that general with forest fruits , garden fruits are named, or the main ingredients (eg. As strawberry rhubarb ) bear the name.

Red grits are typically served with milk and foods made from it. In addition to milk and cream , these include whipped cream , vanilla sauce and ice cream .

The preparation is also known as fruit soup , weakly or not bound , as the ingredients are often identical.

Red grits are mainly attributed to Danish and Swedish cuisine . In Germany it is often described as a specialty of Northern Germany. The Rote Grütze Sylter Art achieved greater awareness as part of a marketing campaign. A similar dish is called a kissel in Eastern Europe , with the attribution mostly pointing to Russian cuisine .