Tomato sauce is a simple sauce from Italian cuisine based on cooked, strained tomatoes , which is the basis of many dishes such as B. Spaghetti alla napoletana forms. It is one of the most famous independent sauces in classic cuisine, i. H. it is not made from a basic sauce , but other derivatives are obtained from it, such as B. the devil sauce .

The first known written mention of an Italian tomato sauce comes from Pietro Andrea Mattioli in 1554 . Presumably the Aztec way of preparing fried tomatoes was introduced to Italy by the Spaniards. 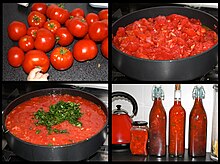 For tomato sauce the traditional kitchen ( sauce tomato ) ham and bacon , Mirepoix and onions finely diced with thyme , basil and bay roasted with flour dusted, after a moment's Next roasting veal broth filled with (crushed) ripe tomatoes and tomato paste added and finally happens. It is served with roasted meat or with fish and seafood or processed as a basic sauce according to a recipe.

The simplest form consists only of tomatoes that have been thickened by cooking and passed through a sieve to remove the seeds and skin. It is usually preserved by boiling and then further processed later depending on the recipe.

The tomato varieties that are most suitable for tomato sauces of all kinds are among the so-called egg or bottle tomatoes , a particularly aromatic and firm-fleshed cultivated form with a low acid content. They are also used to make canned tomatoes and tomato paste, which can therefore serve as a substitute if there are no fully ripe plum tomatoes available.

A common Italian tomato sauce ( Salsa di pomodoro also Passata di pomodoro ) additionally contains Würzgemüse as carrot , celery , onion and garlic , which in oil are sautéed before the tomatoes cut and / or peeled ( Italian pelati be added). The sauce, which has been cooked to the desired consistency, is passed through again, seasoned with salt and pepper , possibly a little wine vinegar and sugar, and finally finished with olive oil . It is often seasoned with herbs such as basil , oregano , bay leaf , etc. There are also countless variations and additions with mostly spicy ingredients such as olives , anchovies , capers , peperoncini or dried mushrooms .