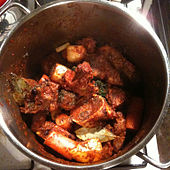 Approach for a grand jus

The large brown stock , also known as large brown broth or Grandjus [ ɡrɑ̃ˈʒyː ] ( French ) is the name for a stock in classic cuisine.

Grandjus stands for “big juice, big broth” from the Latin iūs, iūris, n .: “broth, soup” in contrast to jus , which describes a simple brown stock. Bones and pieces of meat from domestic pigs , cattle and veal are used for the preparation . These are fried together with mirepoix and other vegetables, filled with water and broth and boiled. A typical feature is the use of high-quality stocks, sauces and roast cuts.

It is widely used in commercial kitchens in the form of a large pot remains out over several days to fill funds used and sauces.