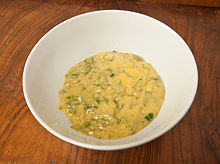 Bearnaise sauce or Béarn sauce is warm whipped butter sauce of classic French cuisine . It is similar to the Dutch sauce , but contains other seasoning ingredients. Bearnaise sauce goes well with fish or grilled or seared meat such as Chateaubriand , but also with steamed fish or asparagus .

Béarnaise sauce on young potatoes and asparagus with veal schnitzel

The sauce does not come from the French region of Béarn , as one might suspect from its name , but was invented by mistake in the 1830s by the restaurant chef Collinet in Saint-Germain-en-Laye near Paris . He may have named the sauce after the Bearn because he himself came from this region. It is more likely, however, that he named the sauce in honor of the Béarnaiser Henry IV (France) , in whose previous residence Collinet's restaurant was located. The sauce quickly became a huge hit. 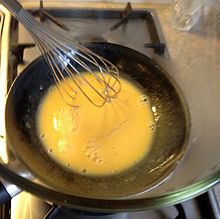 For the preparation of the béarnaise, a reduction of vinegar , preferably tarragon vinegar , tarragon , chervil , shallots and peppercorns, must first be made. Sometimes white wine is also added to the reduction batch. The approach is strongly boiled down and then strained.

The reduction is then whipped up with egg yolk and butter, warmly emulsifying (here a dispersion of liquid butter in water) to a thick sauce ( peeled off to rose ). The whipped sauce is seasoned with salt and cayenne pepper and topped off with chopped tarragon and chervil. Like all whipped, warm butter sauces, it is temperature-sensitive and should be served as soon as possible, unless it can be kept warm in a bain- marie that is only moderately heated.

If the sauce is prepared with a portion of tarragon butter, it is called the Beauharnais sauce .

Various ready-made products are commercially available, the composition of which differs significantly from freshly made sauce. Nevertheless, if the ingredients are labeled appropriately, they can be referred to as béarnaise sauce. Ready-made sauces usually consist of a mixture of water, vegetable oil, egg yolk or egg yolk powder, milk products and seasonings. Depending on the manufacturer, these are supplemented by flavors of different origins, food additives such as emulsifiers , stabilizers and flavor enhancers . When preparing instant products, water and butter can be added.