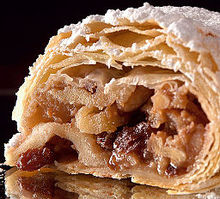 Plum dumplings with cinnamon and sugar

Buchteln in a square baking pan

Pastry is a term used in old Bavarian and Austrian cuisine , which is an umbrella term for various desserts , pastries and cakes that can be served as a main course or dessert .

Historically, flour dishes were filling, meatless main dishes made from flour but also from other cereal products or other starchy foods. They arose from the rigorous fasting laws of the Catholic Church, since believers were not allowed to eat meat on around 150 days a year and fish was often very expensive. This tradition of mostly hearty pastries can be traced back to the 16th century in Austria and southern Germany. Flour dishes included pancakes , strudel , lard biscuits , nocken , noodles , porridges , puddings and dumplings as well as “bouillie” (a flour dish made from fine flour that is baked in a pan with milk or cream and sugar).

In Vienna around 1900, these hearty, rustic dishes were further developed to suit the tastes of the big city, and became increasingly airy and sweeter. In the course of this, the pastries moved to the end of the sequence of dishes. The sweetening of the pastry meant the invention of the sweet dessert, which was not common at the time. Since then, the term has been used for sweet desserts, especially, but not exclusively, in the style of Viennese cuisine . These include, for example, Buchteln , pancakes , Koche , Dalken , as well as sweet Schmarrne, strudel, dumplings, dumplings and tascherl. In addition to flour, pastries today mainly consist of semolina , rice , potatoes and white bread as starchy substances, as well as eggs , sugar , milk , butter and fruits . All pastries have in common that they are prepared by baking, frying or boiling.