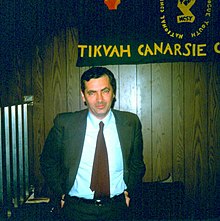 Meir Kahane ( Hebrew מאיר כהנא; * August 1, 1932 in Brooklyn as Martin David Kahane ; † November 5, 1990 in Manhattan ) was an Orthodox rabbi , Israeli politician and founder of the Jewish Defense League and the Kach movement . He represented his own direction of radical religious Zionism , which is known as Kahanism . Its stated goals were the elimination of liberal democracy in Israel in favor of a Jewish theocracy , the expulsion of most non-Jews from Israel and the occupied territories, and the establishment of Greater Israel . In the eyes of democratic Israelis, he was the champion of Jewish racism .

Meir Kahane's father, Charles Kahane, was an Orthodox rabbi and a radical Zionist. He was considered an American supporter of the Irgun , an underground organization that carried out terrorist attacks against the British occupation and the Arab civilian population in Palestine before the establishment of the state of Israel . The father sent the son to the Betar youth founded by Vladimir Zeev Jabotinsky . His youth leader there was the later Israeli Defense Minister Moshe Arens . However, since the Betar youth were not radical enough for the young Kahane, he joined the Bne Akiwa in 1952 . According to his wife Libby, Kahane is said to have been a good student and athlete in his youth. An important hobby for him was baseball . According to Kahane, there were few Jews in his neighborhood and he often had to fight with non-Jewish boys.

As an adult, Kahane was ordained an Orthodox rabbi and took the first name Meir (Hebrew, "The Enlightened One"). In 1956 he married Libby, with whom he had four children. In 1958 he became the rabbi of the Howard Beach Jewish Center in Queens . The community was considered less strictly Orthodox. Initially there he managed to convince many of the young community members to lead a more orthodox way of life. When he wanted to introduce the mechiza - the separation of men and women in the synagogue - he met resistance. His contract was not renewed, so he published the article End of The Miracle of Howard Beach in the Orthodox Jewish newspaper Jewish Press . This was his first article in that newspaper, and he wrote for it until his death in 1990.

From the late 1950s to the early 1960s, Kahane worked as an FBI informant. As this he temporarily infiltrated the John Birch Society . He operated under the code name Michael King at the time and pretended to be a Christian.

In 1968, Kahane founded the Jewish Defense League (JDL) in the USA . The JDL was a paramilitary organization that was primarily directed against African-American gangs who, according to Kahane's statement at the time, were harassing the Jews and were anti-Semitic. The JDL also targeted representatives of the Soviet Union to demonstrate for the freedom of Russian Jews to emigrate . He was arrested 18 times in connection with these activities, but each time he was released from custody on bail. It was always paid for by the Mafia boss Joseph Colombo . In 1971 Kahane went to Israel.

In 1971, Kahane founded the Kach Party in Israel . The goals included calling for the establishment of Greater Israel and a five-year prison sentence for Jews and non-Jews in a love affair. In 1980, Kahane was sentenced to six months in prison for implicated in a plot to provocative sabotage on the Temple Mount in east Jerusalem .

In 1984 the Kach party won a seat in the Israeli parliament ( Knesset ). Kach was particularly popular among young Israeli voters, Sephardic Jews and radical settlers. At that time Kahane organized a sensational victory celebration in Jerusalem in Israel, during which an Arab market and passers-by were attacked. Kahane became a member of the Knesset and declared that he would not support any government that did not support the expulsion of the Arabs. In 1988, his electoral list was no longer permitted because of violations of the newly enacted electoral law ("inciting racism"). The Israeli publicist Uri Avnery characterized Kahane as a "Jewish Nazi" and Kach as a "Nazi party".

Kahane was killed in an attack in Manhattan in 1990 . The main suspect, El Sayyid Nosair , was arrested after an exchange of fire with police but later acquitted of murder charges. Nosair was involved in the 1993 World Trade Center bombing . The attack on Kahane is also shown in the film adaptation of the bomb attack on the World Trade Center (1997).

Kahane's son Binyamin Ze'ev Kahane was also murdered in an assassination attempt in 2000.

Kahane's followers are often anti-Islamic . Kahane himself claimed, however, that Islam and Ruhollah Khomeini are in certain respects much more similar to the Jewish religion than philosophers or politicians of the Enlightenment such as Jean-Jacques Rousseau , John Locke or Thomas Jefferson . Kahane rejected liberalism and Western values as "godless", "non-Jewish" and " Hellenistic ". He saw a contradiction between Judaism and the western-democratic orientation of the Israeli state founders. Kahane emphasized the social sacrifice of Jews for one another; he saw it as the duty of the individual to sacrifice himself for the people and family and to support weak members.

"First and foremost, it is not decency and kindness that impress the Middle East , but strength."

"Every Jew a Twenty-Two "

"It is better to have an Israel that is hated by the whole world than an Auschwitz that is loved by them."

“One of the problems facing Jews is that they would not know a Jewish concept if they did not stumble upon it. I just referred to the Talmud . Most Jews think Judaism is ' Thomas Jefferson '. It's not like this!"