Greater Israel (Hebrew: ארץ ישראל השלמה, Eretz Israel HaSchlema “Complete Land of Israel”, often just “ Eretz Israel ”) is a political demand of Jewish , and occasionally Christian groups in and outside Israel . It postulates the indivisibility of the area called Eretz Israel and includes the extension of Jewish sovereignty to the entire area between the Mediterranean Sea and the Jordan River , sometimes also to parts of Jordan and, in its more extreme form, also to areas of Lebanon , Syria and Egypt . The opinion that Israel is striving for Greater Israel from the Euphrates to the Nile is widespread, especially, but not only, in Arab and Muslim countries. However, this claim, which is also often made by extremist groups, is a conspiracy theory . 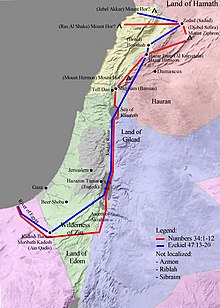 The Davidic empire in different interpretations

The terms Eretz Israel and Eretz Israel HaSchlema refer to the land promised by God to the Jewish people in the Hebrew Bible , the extent of which is described differently in the Bible, for the first time in Gen 15: 18-21  NIV : “On the day closed The Lord made a covenant with Abram, saying, I will give this land to your descendants from the river of Egypt to the great river Euphrates: the Kenites , the Kenazites , the Kadmonites , the Hittites , the Perizzites , the Refaïter , the Amorites , the The Canaanites , the Girgashites , the Jebusites . ”There is uncertainty about the meaning of the individual geographical names used in the Bible, the area is only vaguely defined and formed a time-limited state unit that was politically realized in different borders. The Nile imposes itself as the “river of Egypt”, but in Jewish tradition, especially in the case of Rashi , it refers to the Wadi al-Arish on the north coast of the Sinai Peninsula . In Num 34,2–12  LUT the area includes the Egyptian province of Canaan, which extends from the Negev to southern Lebanon with the Jordan as the eastern border, from which the area described in Ez 47,15–20  LUT differs slightly.

Development before and after the establishment of the State of Israel

The current that emerged in the 1920s, known as revisionist Zionism , within the Zionist movement called for the establishment of a sovereign Jewish state on both sides of the Jordan.

The revisionist Zionist Cherut party , which was founded in June 1948 and later merged into the Likud party , referred to the area on both sides of the Jordan as "the Jewish homeland", even after the establishment of the State of Israel, which constituted a "historical and geographical whole" forms. Until June 1967, Cherut remained the only political party in Israel to take this stance.

The demands of the secular parties and groups in favor of Greater Israel are today usually limited to the areas conquered by Israel in June 1967. The Likud platform for the 1977 Knesset elections, which first brought the Likud to power, contains the promise that "between the sea and the Jordan there will be no other than Israeli sovereignty". After the Likud election victory, the settlement activity of Jewish Israelis, especially of the national religious Gush Emunim, received a considerable boost in the Israeli-occupied territories. Especially in the 1980s, the head of the later banned Kach party, Meir Kahane , called for the establishment of Greater Israel.

In 1994, the majority of the right-wing Likud voted for a peace treaty with Jordan, thereby recognizing its right to exist. In autumn 2008, the then Israeli Prime Minister Ehud Olmert , a former member of the revisionist Zionist Betar youth organization , made international headlines when he declared the "dream of a Greater Israel" dead and said that whoever dreams it continues is doing himself something before.

NIS 10 Agorot coin, on the right the alleged Greater Israel map as the background of the seven-armed candlestick

The Eretz-Israel-HaSchlema ideology has led to various conspiracy theories which state that the pursuit of Greater Israel from the Euphrates to the Nile is the goal of Zionism and Israeli state doctrine. It is also widely believed that the blue stripes on the flag of Israel symbolize the Nile and Euphrates. In a peace education study project of Protestant universities on interreligious and intercultural learning in Jordan and Israel, the demarcation according to Gen 15, 18-21 is referred to as “the ideal of Israel's demarcation with the neighboring peoples”, which, so the claim, “is still on the map today of the Israeli embassy ”.

Many Arab politicians are or were convinced that there is a map in the Israeli parliament that shows Greater Israel from the Euphrates to the Nile, despite the fact that there was never such a map in the Knesset. This view was also held by Yasser Arafat for a long time, although, as the Israeli journalist Danny Rubinstein says in his Arafat biography, Arafat was certainly advised by his co-workers that it is not the case.

At a special meeting of the UN Security Council in Geneva in May 1990, Arafat also claimed that a map of Greater Israel was depicted on an Israeli 10 Agorot coin, based on an essay by the geographer Gwyn Rowley, who was then teaching at the University of Sheffield .