Biblical representation: Expansion of the great Davidic empire , differentiated according to zones of influence, according to information in the Book of Samuel 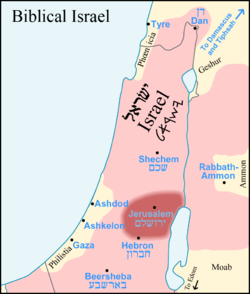 Biblical representation: The pink area represents the territory populated by Israelites according to the lists in the Book of Joshua ; dark red the tribal area of ​​Judas

Eretz Israel ( Hebrew אֶרֶץ יִשְׂרָאֵל Eretz Jisra'el , German 'Land Israel (s)' in literal translation; alternative transcription also Erez Israel ) is a traditional Hebrew name for the country, which in the Torah is mostly called the land of Canaan , in which the Israelites settled down according to the biblical description and lived for several centuries alongside Canaanites , Philistines and other peoples.

Eretz Israel is not precisely defined by the biblical writings, but was able to have different meanings depending on the context: on the one hand, it called the Promised Land or Promised Land , which is not by the Israelites took possession had been. This name refers to the biblical passages in which the divine promise is mentioned to hand over the land " from the Nile to the Euphrates " ( Gen 15,18  EU ) to Abraham and his descendants, for the first time in Genesis . On the other hand, Eretz Israel refers in later text passages to the real settlement area of ​​the Israelites, which comprised only a part of this Promised Land and is traditionally fixed both spatially and temporally to the extension of the Jewish empires Israel and Judah : " from Dan to Beersheba " ( 1 Kings 1.5  EU ). Overall, the term remained vague; That it was designed variably according to the circumstances is also shown by the constantly revised limit lists of the Halacha .

Displacement by other names

After the end of the two empires, the Israelites had to come to terms with alternating great powers, including the Achaemenid and Seleucid empires . With the Hasmoneans , there were Jewish kings again, whose sphere of influence also reached the biblically traditional borders - the name Eretz Israel for the region at this time is unusual. In Roman times the area was administered as the province of Judea , after the expulsion of the Jews into the diaspora it was then united with Syria to form the province of Syria Palestine . ( Main article: Roman Palestine ). Since then, the region has traditionally been referred to as Palestine (and occasionally southern Syria ) in Roman and later European sources , which is also used in some Jewish sources. Holy Land was and is used synonymously. This designation was extremely popular historically, especially during the Crusades .

The Hebrew name Eretz Israel has been used again since the beginning of political Zionism in the 19th century: As part of the Alija (from around 1880) Jewish settlers came to Palestine, which resulted in the yishuv . In Zionist circles the inseparable unity of Am Israel , Torath Israel and Eretz Israel was propagated: People of Israel, Jewish teaching and Land of Israel. During the League of Nations mandate for Palestine , the official name “Palestine” was always given in Hebrew with the addition “-Eretz Israel”.

Today, the term Eretz Israel , if not used in a historical or religious context, stands for the historical homeland of the Jews also outside of today's state territory (the state name is Medinat Jisra'el ), and is used with this meaning especially in the kibbutz - and settler movement often used. In the implied meaning that the land from the Nile to the Euphrates promised in the Old Testament belongs to the people of Israel, Eretz Israel is also equated as a battle term with Greater Israel .