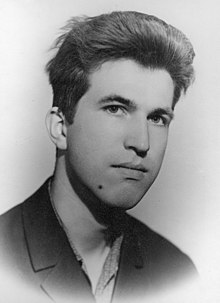 Yuri Wladimirowitsch Matijassewitsch ( Russian Ю́рий Влади́мирович Матиясе́вич , English transliteration Yuri Matiyasevich; born March 2, 1947 in Leningrad ) is a Russian mathematician and computer scientist. He gained notoriety after finding a negative answer to David Hilbert's Tenth Problem at the age of 22 and presenting it as a doctoral thesis.

Matiyasevich went from 1962 to 1963 to the St. Petersburg Lyceum No. 239 and then from 1963 to 1964 to the Moscow Kolmogorov School. In 1964 he won the International Mathematical Olympiad , which is why his last year of high school was waived and he could immediately begin his mathematics studies at the St. Petersburg State University in 1964. As a student he gave a lecture at the International Congress of Mathematicians in Moscow in 1966 . In 1969 he finished his studies and received his doctorate in 1970 ( Russian candidate title ) at LOMI (now POMI), the St. Petersburg branch of the Steklow Institute for Mathematics . He then did research at LOMI, from 1974 as a senior scientist. In 1970 he solved Hilbert's Tenth Problem, building on works by Julia Robinson , Martin Davis and Hilary Putnam , among others , which made him internationally known. In 1972 he completed his habilitation (Russian doctorate). In 1971 he showed constructively that there is an integer multivariable polynomial that generates exactly the set of prime numbers for positive integer arguments with its positive values . Six years later he was able to prove that a polynomial in 10 variables is sufficient for this.

In 1980 he became head of the Laboratory for Mathematical Logic at LOMI. Since 1995 he has been a professor at the State University of Saint Petersburg, first with a chair in software engineering , then with a chair in algebra and number theory .

He also developed algebraically equivalent statements (via polynomials) for the four-color theorem .

Since 2002 he has headed the jury of the Mathematics Olympiad in Saint Petersburg and since 2003 he has also headed the German-Russian Joint Advanced Student School (JASS).