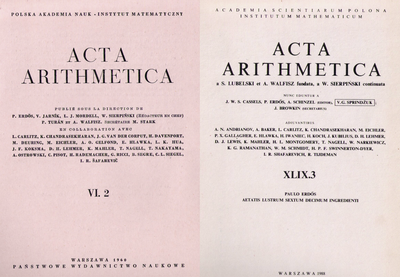 Acta Arithmetica is a mathematical scientific journal with a focus on number theory .

It was founded in 1935 by the Polish mathematicians Arnold Walfisz and Salomon Lubelski and published in Warsaw . There were three volumes of the magazine from 1935 to 1939. Since the fourth volume in 1958, the journal has been published regularly until today (as of 2014, now 4 volumes per year) and is supervised by the Mathematics Institute of the Polish Academy of Sciences . The editor from 1956 to 1969 was Wacław Sierpiński (together with Arnold Walfisz until 1962). In Acta Arithmetica articles appear in German, Russian, French and English, with English predominates in recent decades.

The journal's impact factor in 2012 was 0.472. In the statistics of the ISI Web of Knowledge , the journal was ranked 193 out of 295 considered journals in the mathematics category .