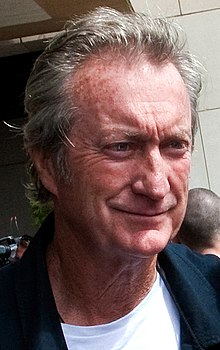 Brown moved to the UK in 1964, where he played a few minor roles at the Old Vic Theater . He later returned to Australia and worked for the Queensland Theater Company. He starred in several television series , including alongside Richard Chamberlain and Rachel Ward in the internationally known series The Thorn Birds , for which he was nominated for the Golden Globe Award and the Emmy Award . He became well known for the lead role in the thriller F / X - Deadly Tricks (1986), which was continued in 1991 with F / X 2 - The Deadly Illusion . He starred alongside Tom Cruise in Cocktail ( 1988) and Sigourney Weaver in Gorillas in the Fog (1988) . This was followed by numerous leading roles in films such as Bloody Oath (1990), Harry's Biggest Coup (1991), The Perfect Murder (1991), Mad Is Murderous (1992), Dead Heart - Deadly Affair (1996) and Chased and Chained ( 1998, alongside Tia Carrere ). For the role in the film Risk (2000) he was nominated for the Film Critics Circle of Australia Award.

Brown was awarded the Order of Australia in 2005.

Brown has been married to Rachel Ward , his film partner from The Thorn Birds , since 1983 . The couple have two daughters and one son. Daughter Matilda and son Joe also work as actors.