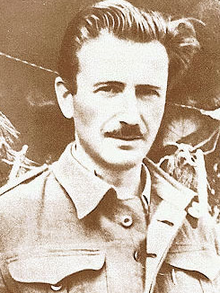 Vafiadis came from the Greek middle class, he fled to Thessaloniki and Kavala as a result of the "Asia Minor Catastrophe" in 1922 . His early political interest led him to the OKNE (Oμοσπονδία Kομμουνιστικών Nεολαιών Eλλάδας), the youth movement of the Communist Party of Greece KKE .

After the occupation of Greece by the Wehrmacht in 1941, Markos Vafiadis joined the largest resistance group, the communist-influenced people's liberation army ELAS under Aris Velouchiotis . In 1944 he was the commander of the Macedonian wing of ELAS. After the Germans withdrew in October 1944, ELAS turned against the British -led reintroduction of the monarchy , which in late 1944 led to armed conflict and British military intervention . In February 1945 ELAS was disarmed and demobilized .

In 1946 General Markos took over the leadership of the newly founded Democratic Army of Greece DSE (ΔΣΕ, Δημοκρατικός Στρατός Ελλάδας), which fought for a socialist Greece, and became Prime Minister of a counter-government installed in Northern Greece in 1947.

With the collapse of several lines of defense, he declared to the Greek Central Army that he was ready to cooperate. This declaration, without which Northern Greece would have been overrun by the Central Army, turned Markos down and forced him to resign from his post as Prime Minister.

Vafiades fled into exile in the Soviet Union via Albania . There he lived in Moscow until the mid-1950s, where he also met his future wife, and worked as a worker in a watch factory. His stay in the Soviet Union was interrupted by a stay in Bucharest for party work. From 1958 he lived in Penza , where he worked in a watch factory. In 1983, after 35 years, he set foot on Greek soil again. Vafiades is still controversial to this day - he is considered a role model and one of the country's greatest visionaries for the Orthodox KKE wing, while he is subjected to sharp criticism by undogmatic communists, socialists and conservatives.

Vafiades planned to build a new type of socialism, this political orientation was declared "Markonism". According to Markos' vision, all monopoly operations and larger companies should be nationalized. Markonism did not envisage the nationalization of civil property such as houses, only industrial and economic nationalization was planned for the independence of the government.

General Markos had planned to introduce a central government after the end of the civil war and planned the image of the leader at the top of the government. The appointment of a leader was one of the most important points of Markonism for Markos, as he could have carried out his plans and visions without any dissenting votes. Among other things, he had the military plan to develop Greece into a large empire, but without incorporation into the territories occupied by the USSR.