As Markos children (after Markos Vafiadis , leader of the Democratic Army of Greece [DSE]) or Greece Children or partisan children were more than 1,100 minors aged between 8 and 17 years old from Greece referred to, together with about 50 adult companions in two groups came to the Soviet occupation zone (SBZ) and the GDR in 1949/1950 as a result of the Greek civil war . 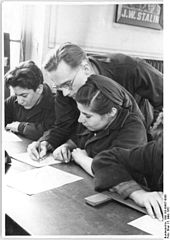 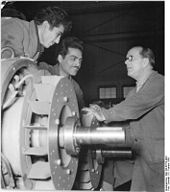 In the Greek Civil War from 1946 to 1949, the Democratic Army of Greece (DSE), which was fighting under communist leadership, was subject to the troops of the Greek King Paul, supported by Great Britain and the USA . At the end of the war, the Communist Party of Greece (KKE) organized the transport of around 28,000 children across the borders to Bulgaria, Yugoslavia and Albania, mainly in the mountainous north of the country. The partisans had announced the operation on March 3, 1948 via their radio station and on March 15, 1948 in their Exormisi newspaper , after it had been decided shortly before at a Cominform meeting in Belgrade on the initiative of Greek delegates . While the fighters and their wives followed from the chaos of war, contingents of children were already transported to other people 's republics under Soviet influence for training in order to later support the development of a socialist society if the opportunity to return to Greece was possible .

The monarchist opponents condemned this action, alluding to the Ottoman boy harvest, as paidomazoma , while of them around 20,000 children and younger siblings of imprisoned and fugitive EAM ( National Liberation Front ) and DSE supporters since 1947 under the patronage of Queen Friederike were interned in so-called re-education camps.

On August 4, 1949, the first group of Markos children with 342 children and adolescents arrived in Saxony , and on July 1, 1950, the second group with 720 children. A few stragglers followed.

Because of the accommodation options and apprenticeship capacities available in the Dresden metropolitan area, they were concentrated in the neighboring town of Radebeul .

The Greeks in the GDR were looked after by the Free Greece Committee controlled by the SED and KKE . Originally the organization sponsored by the People's Solidarity was called the Greek Children's Home , before it was renamed in 1951 as Free Greece - Youth Welfare of the People's Solidarity . In the second half of the 1950s, the organization remained responsible for Greek children as the Free Greece Home Combine . The headquarters of the organization was in the former Grundschänke , a restaurant property that was built in 1875/1876 at the entrance to the Lößnitzgrund . Numerous houses of the combine, especially in the districts of Oberlößnitz and Niederlößnitz, were used to house the children and young people, which was paid for by the state, including Wackerbarth Castle . Small children came to the home in the Villa Tangier . For school education, the committee had the full right to use the school building at Steinbachstrasse 21 , which until 1955 housed the Free Greece elementary school .

In 1958 there were still around 500 Greeks living in Dresden and Radebeul, the others, with their mostly good school and vocational qualifications, had spread to other cities, mostly in Saxony. When the youngest refugees reached adulthood in 1960, over 100 well-qualified skilled workers, technicians and engineers worked in Radebeul companies.

In 1960 a total of 1,317 children from Greece lived in the GDR, meanwhile in groups distributed in cities such as Leipzig, Chemnitz ( Karl-Marx-Stadt ), Erfurt , Zwickau , Bautzen , Neuruppin , Bernburg , Dölkau :

The stateless Greeks without a home passport were only able to return from the GDR after the overthrow of the Greek military dictatorship in 1974 and the opening of an embassy in the GDR in the same year, which was still operated by the junta . Around 1,600 Greeks - 1,050 adults and 550 children and young people - lived in the GDR during this period.

On March 18, 1975, the Secretariat of the Central Committee of the SED decided on a regulation for the relocation of GDR citizens who were married to Greek emigrants or their children, and on April 2, 1975 a regulation on their financial endowment with foreign currency : adults were allowed one-time 3000  Exchange DM , young people and children 1500 DM.

A survey in 1980 recorded 1620 Greeks in the GDR. If not all of the applications for repatriation were initially approved by the Greek side, the possibility of returning became considerably easier after the election victory of the Greek social democratic party PASOK from 1981 onwards.

At the end of 1989, 482 people with Greek citizenship were still living in the GDR.