The title of this article is ambiguous. See also: University of Economics, Technology and Culture , Berlin.

On November 30, 2018, the Free State of Saxony, the Leipzig University of Technology, Economics and Culture and Deutsche Telekom AG presented a joint project in the field of digital transformation: Deutsche Telekom AG is donating 17 professorships that become one faculty at the HTWK Leipzig "Digital Transformation" can be summarized. 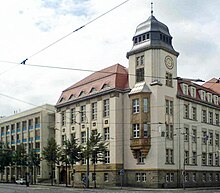 Geutebrück building, main building and official residence of the rector of the HTWK Leipzig in Karl-Liebknecht-Straße 132

The main campus of the HTWK Leipzig is located with 13 buildings along the streets Karl-Liebknecht-Straße , Gustav-Freytag-Straße, Eichendorffstraße and Kochstraße in Leipzig- Connewitz . Several new buildings have been added to the campus in recent years, most recently the Nieper building that opened in 2015 . There are three other university buildings outside the campus: The Vienna building for the Faculty of Electrical Engineering and Information Technology in Wächterstrasse / Zentrum-Süd, the Life Science & Engineering research center in Eilenburger Strasse / Reudnitz and the sports hall in Arno-Nitzsche-Strasse. The automatic museum of the HTWK Leipzig is also located in the VDI-GaraGe in Leipzig-Plagwitz.

Faculties and courses of study

Gutenberg-Bau, Faculty of Computer Science and Media in Gustav-Freytag-Straße 42a

Around 75 percent of the study places are in the so-called MINT area (e.g. construction, electrical engineering, computer science, mechanical engineering, media technology, etc.). In addition, there are various high-demand courses in economics, social work or architecture. A special focus is industrial engineering with a focus on engineering - at the HTWK Leipzig there are most students of this subject in Saxony. Due to the high demand, various courses are restricted in admission.

The courses in printing and packaging technology, book trade and museology can only be studied at a few other universities in Germany.

In total, the following courses are offered at 6 faculties (status: summer semester 2019):

Every year around 10,000 interested parties apply for one of the study places at the HTWK Leipzig. On average, this results in around seven applicants per study place. The selection of future students is regulated by a local numerus clausus . An average of 16 applicants per study place apply for a place in the International Management ( Bachelor ) and Social Work courses. Enrollment takes place in the winter semester (but now also in the summer semester for selected master’s courses).

Teaching cooperation with the University of Leipzig

The Faculty of Mathematics and Computer Science at the University of Leipzig has been cooperating with the Faculty of Computer Science, Mathematics and Natural Sciences at the HTWK Leipzig since 2015 . In addition, there has been a cooperation agreement in the field of economics since 2016. Students of the master’s courses in business administration and business informatics at the University of Leipzig as well as business administration and industrial engineering at the HTWK Leipzig have the opportunity to take part in a selection of modules at the cooperation university and take examinations in them.

The university maintains contacts with numerous partner universities around the world, with which it is connected by means of a cooperation agreement or the EU Socrates / Erasmus program . The International Office advises students at the HTWK Leipzig who want to complete a partial course at a foreign university or their practical semester in a foreign company.

Research at the HTWK Leipzig

With third-party funding of constantly more than 10 million euros per year, the HTWK Leipzig is one of the strong research universities for applied sciences in Germany. The university acquires around a third of its third-party funding from federal funds, almost a quarter come from funding programs of the European Union and around a fifth from business. More than 250 employees are financed from the third-party funds. The majority of them work as young scientists in research projects.

The university bundles its teaching and research skills in four profile lines:

The strong research orientation of the HTWK Leipzig can in part be traced back to its university predecessor, the Technical University of Leipzig, where research was carried out on an international level in the GDR in the construction industry and automation technology . In 1997 the HTWK Leipzig founded the Research and Transfer Center Leipzig (FTZ) e. V. as a non-profit, non-university institution. The FTZ wants to connect “industry, business and local authorities with the scientific and technical potential of the university” by offering an organizational and legal platform for cooperative research and development projects. A joint EMC center of the HTWK Leipzig and the University of Telecommunications Leipzig is located at the FTZ .

In 2010 the HTWK Leipzig opened the “Life Science & Engineering” research center on the site of the former children's clinic in Leipzig-Reudnitz. Various laboratories and workshops are located in the building, which are used by several research groups from the fields of health and medicine. In 2012 the research center was named one of 365 places in the land of ideas . Since 2014 there has been another university building with the “Research Center Campus” at Karl-Liebknecht-Straße 143, which is exclusively dedicated to research.

The Graduate Center of the HTWK Leipzig, founded in 2016, supports around 80 young scientists who are doing their doctorate in cooperation with a university. Since 2014, the HTWK Foundation's dissertation prize has been awarded annually for an outstanding dissertation.

The Nao -Team HTWK has been one of the world's best teams in robot football for years and was able to achieve numerous successes at the RoboCup German Opens and the international RoboCups . In 2018 the team became world champions for the first time. In addition to several Nao robots, it consists of students and alumni of the university. It has played in the Standard Platform League since 2009 . The modern problems of robotics - self-localization , path planning and swarm coordination - should be solved in dealing with the robots and in developing the game algorithms.

The concrete canoe team of the HTWK Leipzig won several gold medals at the international regattas in Germany and the Netherlands in recent years with its self-made racing boats made of concrete . a. 2018 and 2019 at the Betonkanurace in Eindhoven. In 2019 the men's team also won first and second place in the concrete canoe regatta in Heilbronn. New scientific findings from the field of textile-reinforced concrete are constantly being incorporated into the construction of the concrete canoes. 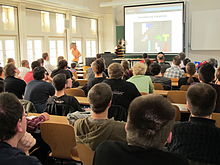 Long night of computer games at the HTWK Leipzig

Public lecture series with free admission take place weekly during the semester . Every January is an open house, in April / May the university information day and then the Long Night of Computer Games take place. This festival dedicated to the culture and history of the games attracts several thousand visitors from all over the republic every year. In addition, the HTWK Leipzig takes part in the Long Night of Sciences in Leipzig, which takes place every two years , and several thousand visitors also visit the university. In addition, the university is the venue for various specialist conferences that are realized in cooperation with other scientific institutions or partners from the economy.

(* Sponsored by the Free State of Saxony )