Adam Friedrich Oeser (born February 17, 1717 in Pressburg ( Kingdom of Hungary ), † March 18, 1799 in Leipzig ) was a German painter , sculptor and book illustrator , who mainly worked in Dresden and Leipzig.

After a two-year apprenticeship in Pressburg, Oeser went to Vienna in 1730 with the painter E. F. Kamauf (1696–1749) , where he was apprenticed to Jacob van Schuppen until 1739 . From 1733 to 1735 he also learned from the sculptor and medalist Georg Raphael Donner (1693–1741) in Pressburg and in 1739 went to the second center of baroque culture in Dresden, where he completed his training and worked as a painter until 1756.

In 1754 Johann Joachim Winckelmann moved from Schloss Nöthnitz near Dresden to Oeser in Königstrasse to learn to draw with him.

Pleißenburg in Leipzig. Colored engraving by S. Blattner. The art academy, newly founded in 1764, where Goethe took drawing lessons under Oeser's direction, was located in its rooms.

Oeser worked in Leipzig from 1759. On February 6, 1764 he became the first director of the newly founded Leipzig Drawing Academy . A few days later on February 13, 1764, he was appointed court painter to the Elector of Saxony and in the same year an honorary member of the Leipzig Economic Society . He held this office as director of the academy for a period of 35 years until his death. At the end of his tenure, Oeser left behind a recognized art academy that has continued to develop steadily up to the present day as a college for graphics and book art (HGB). The development period of the academy after the founding of the Reich in 1871 under the directorate of Ludwig Nieper was also particularly striking, with its own new building at Wächterstrasse 11, which today serves as the headquarters of the HGB. In addition, in 1875, Nieper was the founding director of the “ Städtische Gewerbeschule Leipzig ”, whose new school was built under his directorate directly next to it at Wächterstrasse 13 and is now used by the University of Technology, Economics and Culture ( Wiener-Bau ). 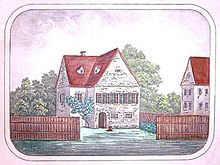 From 1765 to 1768 Oeser's pupils included the student Johann Wolfgang Goethe , for whom the friendly relationship with the teacher and his family was to be formative. From 1760 to 1770 Oeser stayed in a rented country house in Dölitz south of Leipzig, where Goethe also visited him. Goethe made a friendship with Oeser's daughter Friederike Elisabeth (1748–1829) in 1765, which remained in correspondence for a while after his Leipzig years. Oeser stayed in contact with Goethe himself through letters until he left for Strasbourg.

Interacting with new visits by Goethe in Leipzig, Oeser later actively supported artistic work in the poet's new field of activity in Weimar , where Oeser was introduced to court. The friendship between Oeser and Goethe lasted lifelong.

In 1799 Oeser died in Leipzig at the age of 82. He found his temporary resting place in the old Johannisfriedhof in a family crypt in the fourth section. In 1867 he was exhumed and reburied in the Neue Johannisfriedhof . After this cemetery was closed, his grave slab was embedded in the eastern outer wall of the Nikolaikirche . 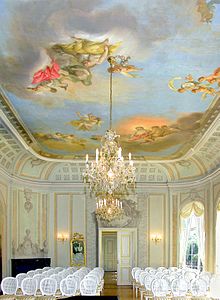 Gohliser Schlösschen, ceiling painting "The Path of the Psyche" by AF Oeser, completed in 1779.

Oeser initially followed the prevailing baroque style in his commissioned works, but he himself strived for a new classical high image, which he established with Winckelmann in noble simplicity, quiet size , based on the works of classical antiquity . However, he did not actually systematically develop a doctrine, was above all strong as a practical mediator and co-founder of the new and of the time and particularly encouraged the young Goethe to turn away from the encyclopedic ideal of the Enlightenment and the first germs of the later cult of genius :

“If you go to the first best coat of arms stone cutters and see him work for an hour, you will find the Plinic words better and explain the meaning of them more correctly. I bet you will laugh so healthy at Christians, Lessing and Klotzen that you will recover completely. "

- Adam Friedrich Oeser : To Goethe , who was cured in Frankfurt, about a position with Pliny that Lessing had misinterpreted on November 25, 1768.

Among other things, Oeser painted the ballroom in the Gohliser Schlösschen and the Nikolaikirche Johann Carl Friedrich Dauthes as well as the monument to the last elector and first king of Saxony Friedrich August III./I. in Leipzig, which was also created in collaboration with Dauthe. He also designed the concert hall of the Gewandhaus (1781), the Comedy House on the Rannische Bastei (also: Altes Theater , 1781) and the house of the mayor Carl Wilhelm Müller in Johannisgasse (1780) with ceiling paintings. The theater curtain made by him in 1766 for the Comödienhaus is an outstanding example of his allegory art and was known beyond the city limits of Leipzig. The same applies to his allegorical monuments to the poet Christian Fürchtegott Gellert ("Gellert Monument", 1774) and the friendship monument with the art philosopher Johann Georg Sulzer ("Sulzer Gellert Monument", 1781).

Oeser also dealt with everyday things. He designed tables, chairs, picture frames and writing desks and supplied designs to the serpentine lathe operators in Zöblitz . He included craftsmen in his lessons in order to raise the level of design of the everyday objects.

In Leipzig, a street in Schleußig and the 70th school (elementary school) in the Leipzig district of Eutritzsch have been named Oesers since 1895 . In addition, a memorial plaque at today's College of Graphics and Book Art commemorates him. In Dresden, a plaque in memory of him and Winckelmann is attached to his old house at Königstrasse 10.