In 1969 Christiane Brunner was a founding member of the women's liberation movement (FBB). From 1976 to 1978 she worked as a lawyer at the Federal Social Insurance Office, from 1980 to 1989 in a law firm in Geneva. 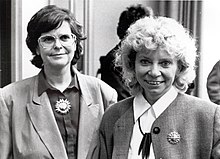 In the Federal Council election on March 3, 1993 , Brunner was to succeed René Felber in the Federal Council as a candidate of the Social Democratic Party . The bourgeois parliamentary majority , however, chose their party mate Francis Matthey instead , which led to significant protests - especially by women. Matthey subsequently declined to accept the election. For the renewed election on March 10th, the SP presented two candidates, Christiane Brunner and Ruth Dreifuss - the latter was elected in the third ballot ( see also: Brunner Effect ).

In the 1995 election the former National Councilor Brunner was for the Canton of Geneva in the Senate voted - this belonged to 2007, when she in the election did not run. She took a seat in the Legal Commission, the Commission for Social Security and Health and the Commission for Foreign Policy and, from 1999, in the State Political Commission.

During a deep internal party crisis after Ursula Koch's departure , Christiane Brunner was elected her successor as SP party president in October 2000 and led the party until March 2004. She is perfectly bilingual.

President of the Social Democratic Party of Switzerland (SP)