The balsa tree ( Ochroma pyramidale ) is the only plant species of the monotypic genus Ochroma and belongs to the family of the mallow family (Malvaceae). It is native to the Neotropic and is grown in many areas of the tropics . Its frequently used wood is characterized by an extremely low density . 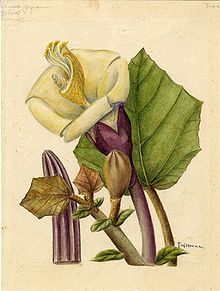 The balsa tree grows as a medium-sized or rarely large, deciduous or evergreen tree with a spreading crown. It is very fast-growing and can reach heights of usually up to 30, rarely up to 50 meters and a trunk diameter of about 100, rarely up to 180 centimeters. The mostly straight, cylindrical and often relatively short trunk has short buttress roots on older specimens . The smooth bark is marbled gray and white.

The heart-shaped leaves , up to 40 centimeters in size, are arranged alternately and spirally on the branches and have long stems . The simple leaf blade is three to five-edged lobed with hand-shaped leaf nerves . The underside of the leaf is pale green and fine-haired. The petioles are slightly hairy. There are small stipules present.

The funnel-shaped flowers stand individually in the leaf axils. The relatively large, hermaphrodite and long-stalked flowers are radially symmetrical and five-fold with a double flower envelope . The five hairy, rust-colored sepals are fused tubular with five unequal lobes. The five free, fine-veined petals are yellowish-whitish. The many stamens have grown together to form a stamen tube that ends with five short lobes and contains corrugated anthers from the middle to the upper end. The upper ovary is five-chambered. Each ovary chamber contains many ovules . The club-shaped stylus ends in a screw-like scar. The flowers are pollinated by bats , but also by tree-dwelling mammals ( wrapped bears , Central American maci bears and opossums ), they open in the evening and give off a strong, sweet or often unpleasant odor. The next morning the flowers have already faded.

The elongated and narrow capsule fruit is ribbed and up to 25 centimeters long and has thick woolly hairs on the inside. The capsule fruits, which pop up with five flaps, contain many small, egg-shaped and flattened seeds with seed hairs (seed wool) that are used to spread the wind .

Like kapok, the seed wool can be used for upholstery and the like. a. be used. The bast fiber can be used to braid ropes.

Balsa wood is a very light, easy-to-work type of wood . The density of balsa wood is between 40 and 340 kg / m³. Often densities are between about 100 kg / m³ (0.1 g / cm³) and 200 kg / m³ (0.2 g / cm³). This is about a third the density of spruce wood . Balsa wood with a density of 150 kg / m³ has a thermal conductivity of about 0.05 W / (m · K) perpendicular to the grain, which makes it interesting as an insulating material in solid construction. The density and thermal conductivity of light balsa wood therefore come close to the values ​​of rigid polystyrene foam . Denser balsa wood has a higher strength, a higher modulus of elasticity and a higher hardness and can be compared to the wood of the bluebell tree . The properties of balsa wood depend on the cut. "Quarter Grain" (wood from the middle of the trunk) has the best properties.

In the country of origin it is used to build rafts . It is used all over the world as a substitute for cork , but above all it is a popular raw material among model makers (especially for model aircraft and ship models ). Even table tennis bats are made partly from balsa. In addition, balsa wood is of great importance as the core material of fiber composite materials in sandwich construction , for example in boat, sail and small aircraft construction, but also for some types of rotor blades for wind turbines . Among other things, balsa wood is used in the 75 m long rotor blades of the Siemens SWT-6.0-154 , which are among the longest rotor blades currently used in the wind energy industry. In 2013, a bridge for trucks with loads of up to 40 tons was built from balsa wood for the first time in Switzerland. Before surfboards were made from synthetic resin and with a plastic foam core, the Hawaiian surfboards were made from balsa wood. Even today, some surfers still appreciate balsa boards. In addition, balsa wood is also used to build wobblers for fishing for predatory fish and to build floats for float fishing.

The instrument capsules of the American space probes Ranger 3 to 5 were supposed to withstand the hard impact on the moon's surface in 1962, protected by a spherical housing made of balsa wood.

The Kon-Tiki raft by the Norwegian Thor Heyerdahl was mostly made of balsa wood.

The wide neotropical distribution area of Ochroma pyramidale extends from southern Mexico over all of Central America as well as many Caribbean islands and large areas of South America to Peru . The balsa tree is grown in many tropical areas of the world. It is a neophyte in many tropical countries .

It was first published in 1788 under the name Bombax pyramidale by Antonio José Cavanilles in Jean-Baptiste de Lamarck : Encyclopédie Méthodique, Botanique , 2, p. 552. It was published in 1920 by Ignaz Urban in Repertorium Specierum Novarum Regni Vegetabilis, Supplements , 5, P. 123 placed in the genus Ochroma . The genus Ochroma was established in 1788 by Olof Peter Swartz in Nova Genera et Species Plantarum seu Prodromus , 6, p. 97. It turned out that all names published in this genus are synonyms of Ochroma pyramidale .

Ochroma pyramidale is the only species of the genus Ochroma from the tribe Ochromeae in the subfamily Bombacoideae within the family Malvaceae . Ochroma pyramidale is morphologically very variable and has a very wide natural range, therefore many species have been described, and so this genus contained at least eleven species for a long time.