Melanie Anne Safka-Schekeryk (* 3. February 1947 in Astoria , New York as Melanie Anne Safka ) is an American singer and songwriter . Became known Melanie as a young singer under the stage name Melanie particularly by their performance at Woodstock Festival 1969th

Melanie Safka is the daughter of a Russian-Ukrainian father and the Italian blues and jazz singer Polly Safka-Bertolo (1926–2003), who was born in Queens in New York . At the age of five, she made her first recording with Gimme a Little Kiss , a song she performed in the manner of Shirley Temple .

Melanie started playing the ukulele when she was six. She originally wanted to be an actress. When she was supposed to audition for a theater role in 1967, she was allegedly wrong in the address, got into the office of the New York manager and record producer Peter Schekeryk with her guitar and was finally signed, managed and married by him.

In Europe they recognized her talent earlier than in the United States . Her song Bobo's Party in 1969 topped the French charts for several weeks in a row. In the same year she had a hit with Beautiful People in the Netherlands and performed at the Woodstock Festival, where she took the place of the Incredible String Band that refused to perform in the rain.

The then 22-year-old Melanie said she was apparently the only one in Woodstock who was not under the influence of drugs. She knew all the artists from the media, but had never seen any of them up close. That was not the only reason why she appeared with severe stage fright . She played her two songs, Beautiful People and Birthday of the Sun , while the audience moved candles in the dark to the beat of the music that had been distributed earlier. This moment she held later in the song Lay Down (Candles in the Rain) (German: Candles in the Rain ) found it the following year and accompanied by a choir of the Edwin Hawkins Singers managed to No. 6 of the US charts and also in Europe was very successful.

Their biggest hit in their homeland in 1971 was Brand New Key , also known as The Roller Skate Song, which made it to the top of the US charts. It was also very successful in Germany and Great Britain in 1970/71 with the Rolling Stones title Ruby Tuesday from 1967. The world's most successful song by Melanie was What Have They Done to My Song, Ma , which is known in Germany in the original version, but also in the German version by Daliah Lavi : “Who destroyed my song like that, Ma?”. Other successful titles were Peace Will Come , Nickel Song , Ring the Living Bell and the 1973/74 cover version of the Shirelles title Will You Love Me Tomorrow . Melanie was awarded three gold records . In 1972 she received the Silver Bravo Otto from the German youth magazine Bravo in a readers' poll . Melanie was politically active as a UNICEF ambassador. 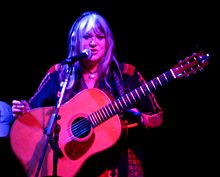 Since her appearance in Woodstock, the singer has released an album almost every year, mostly produced by her husband Peter Schekeryk, who died in 2010. She has three children, to whom she devoted herself more after the decline in record sales from 1973, all of whom are also active in the music business: Leilah, Jeordie and Beau Jarred Schekeryk. She lived in Munich for a while and then back in Florida.

A first comeback took place in 1978 with the album Phonogenetic. Not Just Another Pretty Face with jazz rock musicians like Dave Sanborn , Michael Brecker , Randy Brecker , Richard Tee and Will Lee . Her 1985 album Am I Real Or What was more connected to the pop mainstream .

In 2003, the Australian hip-hop group The Hilltop Hoods used a sample from Melanie's People in the Front Row for their song The Nosebleed Section . In the same year her album Paled by Dimmer Light was released , which is a co-production between Peter and Beau Jarred Schekeryk.

She still tours almost every year and is often accompanied by her son Beau Jarred as a guitarist.

Safka-Schekeryk is a member of the Libertarian Party .