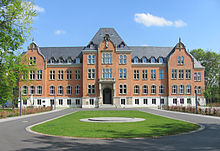 The Ahlen program is an economic and social program of the CDU in the British zone that was decided on February 3, 1947 in the St. Michael high school in Ahlen under the motto "CDU overcomes capitalism and Marxism" .

“The capitalist economic system has not done justice to the state and social vital interests of the German people. After the terrible political, economic and social collapse as a result of criminal power politics, only a fundamental reorganization can take place.

The content and goal of this social and economic reorganization can no longer be the capitalist striving for profit and power, but only the well-being of our people. Through a common economic system, the German people should receive an economic and social constitution that corresponds to the law and dignity of the human being, serves the spiritual and material structure of our people and ensures internal and external peace. "

The western occupying powers USA, Great Britain and France were skeptical or even negative about German industry and large corporations because of their previous ties with the National Socialists. At the same time, the CDU - looking for internal orientation - threatened violent wing battles on the part of the constituting social committees. The left wing of the CDU was of considerable strength; under the leadership of Jakob Kaiser , he demanded a stronger focus on “socialism out of Christian responsibility”. This found its expression in the Ahlen program, which called for a partial socialization of large-scale industry and strong co-determination rights. At the same time it spoke out against state socialism .

Adenauer responded to this request with a draft formulated by him on January 7, 1947, which was later reproduced almost word for word in the Ahlen program. In the years after the adoption of the Ahlen program , an economic policy strategy based on the social market economy prevailed within the CDU, largely driven by Konrad Adenauer . The program was revised and further developed by the Düsseldorf guiding principles adopted two years later .

As Rudolf Uertz has shown, a key to interpreting a liberal reading was Adenauer's principle, which was included in the preamble: “The starting point of all economics is the recognition of personality. Freedom of the person in the economic field and freedom in the political field are closely related. The organization and management of the economy must not deprive the individual of his or her freedom. ”These provisions can also be found in his Neheim-Hüstener program of March 1, 1946.

The Ahlen program has a lasting economic and legal historical effect on the social obligation of property ( Art. 14 of the Basic Law), which was later included in the Basic Law , and the reorganization of the relationship between employers and employees through collective bargaining , works constitution and corporate co-determination .