Roswell is a city in the southeast of the US state New Mexico . Their area extends over an area of ​​75 square kilometers. With 45,293 inhabitants (2000) Roswell is the fifth largest city of New Mexico. The city is located in Chaves County , whose county seat (administrative seat) it is.

About 15 miles southwest of present-day Roswell, the area's first non-Indian settlement was established in 1865 by a group of pioneers from Missouri . However, it had to be given up again due to a lack of water supply. A businessman from Omaha , Nebraska , Van C. Smith, and his partner Aaron Wilburn built two adobe houses in 1869 that gave birth to what is now Roswell. The two buildings were used as a general store, post office and sleeping quarters for paying travelers.

The American scientist and rocket pioneer Robert Goddard worked there in the 1930s .

In late 1946, the 509th Composite Group , which dropped the atomic bombs on Hiroshima and Nagasaki , was relocated to Roswell Army Air Field. After being renamed Walker Air Force Base, it became the largest Strategic Air Command site . The site later went to civilian operators and became the Roswell International Air Center .

In the summer of 1947, a UFO is said to have crashed nearby . To mark the sixtieth anniversary of the so-called Roswell Incident , the city hosted the Amazing Roswell UFO Festival from July 5-8, 2007 .

On October 14, 2012, the Red Bull Stratos event took place in Roswell . In this experiment, the Austrian extreme athlete Felix Baumgartner jumped from a height of 39 km from a capsule hanging under a helium balloon to the earth. Here he broke some world records. 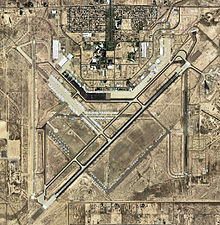