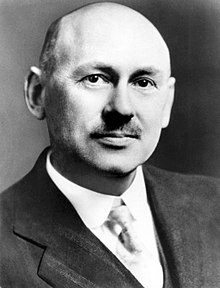 Goddard on the Clark University blackboard, 1924 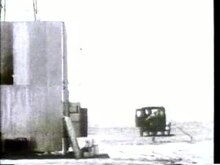 Robert Hutchings Goddard (born October 5, 1882 in Worcester , Massachusetts , USA , † August 10, 1945 in Baltimore , Maryland ) was an American scientist and rocket pioneer . Its full importance for technology and space travel was only recognized posthumously.

Robert was the only surviving child of Fannie Louise Hoyt and Nahum Danford Goddard. As a child he became interested in space after reading The War of the Worlds , a utopian novel by HG Wells . As a child he suffered from tuberculosis and had a lot of time to read because he sometimes couldn't go to school. He attended the Worcester Polytechnic Institute , from which he graduated in 1908 with a Bachelor of Science (BS) in physics. Goddard then continued to study physics at Clark University in Worcester ( Massachusetts ), where he received his master's degree in 1910 and a doctorate in physics the following year. In 1912 he went to the Palmer Physical Laboratory at Princeton University . He later taught physics as a part-time teacher at Clark University, and in 1923 became head of the physics laboratory there.

In 1920, the Smithsonian Institute published his seminal paper Methods for Reaching Extreme Altitudes , in which he claimed that rockets could be used to send payloads to the moon. The press found it absurd that rockets could ever reach the moon, made fun of its publication and dubbed it "Moon Man". To avoid further observation, Goddard eventually moved to New Mexico , where he could conduct his research in a quiet room. During his lifetime, his work hardly attracted any serious attention.

In 1924 he married Esther Christine Kisk.

Similar to Konstantin Eduardowitsch Ziolkowski and Hermann Oberth , Robert Goddard also thought about space flights to the moon and Mars at an early stage . Because of his bold visions of space flight, however, he was dismissed as a dreamer and was almost completely forgotten in relation to space travel.

Goddard was more successful in the field of rocket development . As early as 1918, he was developing military solid rockets and the prototype of the Bazooka , an anti-tank missile. The bazooka was only completed after the end of the First World War and was therefore only used in the Second World War .

He not only developed the mathematical basics of rocket propulsion and a practicable technique for rocket tests (engine test bench, etc.), but also proved that rocket propulsion systems can produce thrust in a vacuum, which is what makes space travel possible.

From 1916 Goddard dealt with the development of liquid rockets . The Smithsonian Institution (see also SAO ) supported him financially. The first attempt to burn a model rocket took place on December 6, 1925, the first successful rocket launch on March 16, 1926. Although this rocket was only 2.5 seconds in the air, only 50 m far and only 14 m high, it proved that Goddard's rocket dreams can come true. The launch site for these rockets is now recognized as a National Historic Landmark under the name Goddard Rocket Launching Site .

On July 17, 1929, Goddard launched the first liquid-propelled rocket with a scientific payload . There was a barometer, a thermometer and a camera on board. The rocket reached a height of 27 meters. Because of the noise at launch, he got some problems with the authorities and was banned from launching his missiles in Massachusetts. Through the subsequent newspaper reports Charles Lindbergh became aware of Goddard and won Daniel Guggenheim to support his rocket tests.

From October 1930 Goddard worked in Roswell , where he achieved new records with his fifth rocket launch. The missile reached an altitude of 610 meters and flew at about 800 km / h. During this and during the following take-offs, Goddard became aware of the problem of flight stabilization.

After a break of almost three years, he launched a rocket on March 8, 1935, which was the first to break the sound barrier at a speed of 1125 km / h . On March 28, 1935, he achieved the breakthrough with another launch of a gyro-stabilized rocket. The rocket reached an altitude of 1,460 meters and flew nearly 4,000 meters.

It was only in the course of further rocket development after the Second World War that it was given the recognition it deserved - including the naming of the Goddard Space Flight Center .

The moon crater Goddard is named after him, as well as a version of the Autodesk Inventor software released on March 26, 2007 and an asteroid , (9252) Goddard .