The title of this article is ambiguous. Further meanings are listed under Aotearoa (disambiguation) .

Aotearoa [ aoˌteaˈroa ] is the most widely used and accepted Māori name for New Zealand today .

Kupe, a paddle in hand, with two sea monsters at his feet

The etymological meaning and origin of the word is still unknown and there are various theories about it. Aotearoa is made up of the three words " ao ", " tea " and " roa ". The first word component has the meanings “cloud”, “earth” / “world” and “day” / “daylight” / “twilight”, the second “white” and the third stands for “long” or “large” / “high” ". The most common translation of these three words strung together is the land of the long white cloud ( English : The land of the long white cloud).

According to an oral legend of the Māori , the daughter of the discoverer Kupe is said to have seen something white on the horizon and “ He ao! Hey ao! "(" A cloud! A cloud! "). She had discovered the Great Barrier Island , which in the Māori language is still called Aotea (i.e. white cloud) to this day . When the Māori soon discovered a much larger land mass behind this island, they named it Aotea Roa .

Clouds on the high seas

One theory that ties in with this legend relates to lenticular clouds . Since both the North and South Islands have extremely high mountain ranges for the South Pacific , they generate standing waves . The resulting elongated foehn clouds differ significantly from the usual cumulus clouds . Since clouds are often the first thing that can be seen of a land on the high seas, a name for these unusual clouds would be obvious. 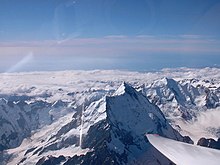 Exceptionally large clouds are not characteristic of New Zealand. Therefore, another theory relates to the snow-capped mountains of the New Zealand Alps of the South Island and the Volcanic Plateau of the North Island. Unknown to the Polynesian immigrants, they would have mistaken the mountains for cloud cover.

A third theory translates the term in the sense of "land of long, bright days". Due to New Zealand's southern location below the tropics, the twilight and summer days last relatively long. This circumstance was very unusual for the Polynesian explorers, as they knew from their homeland a rapid change between daylight and night darkness and equally long but shorter days. This theory is supported by the Maori name " Rakiura " for Stewart Island . This term can be translated as “glowing sky” and it probably refers to the often spectacular sunrises and sunsets as well as the southern lights .

In pre-colonial times there was no single, comprehensive name for the islands that make up New Zealand today. Some Iwis referred to the North Island as Aotearoa or Aotea . The more common name for the North Islands, however, was Te Ika a Māui (the fish of Māui ), while the South Island had various names such as Te Wai Pounamu (the nephrite / jade water), Te Wāhi Pounamu (the nephrite / jade place) or in contrast to the north island Te Waka o Māui / Aoraki (the canoe of Māui / Aoraki ).

With the arrival of the Europeans, the name "New Zealand" established itself for the archipelago . The Māori initially reproduced this term onomatopoeic and transliterated it with Niu Tireni , Nu Tirani or similar terms (for example in the Treaty of Waitangi ). Today, however, this term is largely rejected, as the Māori prefer neologisms over translations from English.

The term " Aotearoa " for the whole of New Zealand was probably also introduced by Pākehās (New Zealanders of British / European descent, or simply non- Māori ). Historians like Michael King attribute its use to a mistake in the February 1916 issue of School Journal. The term was then probably propagated in a similar way to the myths about the Moriori . Nevertheless, it gained increasing popularity among the Māori (also the name " Aotea ", which is rarely found today).

Aotearoa is still not an official translation or name of New Zealand, but the term is usually also used in official documents and names. The National Library of New Zealand , for example, bears the Maori name " Te Puna Mātauranga o Aotearoa " and the Maori text of the national anthem " God Defend New Zealand ", which has been bilingual since the 1990s , calls New Zealand Aotearoa .

Overall, the term has increased significantly in popularity in the last 25 years and is now used by both Māori and Pākehā .

This term is also used by the Anglican Church in Aotearoa, New Zealand and Polynesia .