Waka is the Maori name for a canoe used by the Māori in New Zealand . On the one hand, it describes the canoe as a boat and, on the other hand, together with an addition to the name, the canoe with which their ancestors came from Hawaiki to New Zealand and from which they descended.

Waka as a reference to ancestry

The New Zealand ethnologist Stephenson Percy Smith took the early 20th century, the various tribal stories and wrote together that Kupe , of the Māori narratives shall be recognized as the discoverer of New Zealand, according to legend, came to 950 n. Chr. To New Zealand, Toi to 1150 and the great immigration, known as the "Great Fleet" and called heke (migration) in Māori terminology, is believed to have taken place around 1350, with the latest archaeological findings seeing the arrival of Polynesian immigrants around 1280. 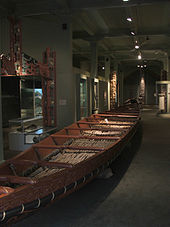 Waka at the Otago Museum in Dunedin

The eight canoes that are believed to have arrived in New Zealand in 1350 and with which the various Māori tribes identify themselves are:

Which canoe one descended from was and is of great importance for the Māori and part of their identity. This explains why the canoe was the "figurehead" of every tribe up to the beginning of the 19th century. But the 19th century brought drastic changes in culture and society for the Māori , due to the influence of European immigrants. The canoe was increasingly lost as a status symbol and its place was replaced by the Wharenui (meeting house) in the Marae as a place where the tribe identified with their ancestors and their origins. The canoe has been revered since then, but is only used for festive purposes, for boat races or as a tourist attraction and leisure activity.

The hulls of the Māori canoes and those used for the crossing to New Zealand were made in one piece and made from long logs. The boats used by Polynesian immigrants were originally smaller and more unstable than the Māori canoes in New Zealand. They were shorter and narrower and were usually fitted with an outrigger to give the boats stability. Researchers assume that no boats with outriggers were used for the long journey across the Pacific Ocean , but two boats were connected in parallel at a distance in order to achieve greater stability on all sides on the high seas. The canoes were equipped with sails for the trip, which could last up to a month.

The Māori canoes can be divided into four categories:

In 2012, a wooden wreck of a canoe was found on the northwest coast of the South Island of New Zealand near the Anaweka River , which archaeologists can date to around 1400. The construction of the canoe showed similarities with those found in the southern Cook Islands . The relief of a sea ​​turtle on the side stern of the boat, which cannot be found among the Māori as an animal symbol , points to Polynesian origin. The hull had a length of a good 6 meters and was 85 cm wide at its widest point. The insides had transverse ribs, which are also untypical for well-known Māori canoes. The boat must also have had a sail. It cannot be determined whether this archaeologically valuable find belonged to the boats with which the Polynesian ancestors came to New Zealand. The canoe provides further information about the design and use of the Māori canoes , which were still used at the beginning of their settlement in New Zealand.

Waka can also be taken as a term for “long, narrow container”, “water trough” or “flock” (of birds) and means ' waka huia ' treasure chest.