Nymphaea spec. , Astrosklereid from the leaf stalk in polarized light

The water lily plants (Nymphaeaceae) are a family of plants in the order of the water lily-like (Nymphaeales). With 58 (to 75) species in five genera , the Nymphaeaceae are one of the small families of flowering plants. Outside of the polar climatic zones, it is only found in freshwater worldwide.

Air chambers in the petiole of Nymphaea , cross section.

Most of the species in the Nymphaeaceae family are perennial , rarely annual , herbaceous plants . They are all aquatic plants anchored in the bottom of the water with adventive roots with creeping or upright, branched or unbranched rhizomes , which can be bulbous and thickened, as persistence organs that form stolons in some species. The rhizodermis is divided into long and short cells. There is no secondary growth in thickness . They have scattered vascular bundles without cambia and without trachea . The sieve tube plastids have no protein crystalloids. A milky sap is present in the plants . There are very clear air chambers in the vegetative parts of the plant.

Underwater and floating leaves can be used as leaves . The alternate and spiral leaves are simple and petiolate. The simple leaf blade is often heart-shaped to circular, shield-shaped (peltat) and network-veined. The leaf margin is smooth or spiky-serrated. There may be stipules .

The flowers are solitary, lateral on often long pedicels on or above the water level, they rarely bloom below the water level. The large, hermaphrodite, more or less radial symmetry flowers are often fragrant. The petals are partially helical (acyclic). The bracts can continuously change into nectar leaves and these into stamens. The inflorescence usually consists of two circles. The five or 20 to 50 free, mostly green sepals can be corolla-like ( Nuphar ). The five ( Nuphar ) or 15 to 50 petals are yellow or white over pink to purple and blue; they are seldom missing. There are 40 to 80 centripetally developing, spirally arranged, free stamens , 11 to 20 of which can be staminodes (in Nuphar there are nectar-forming scales). The stamens are broad to slender. The anthers are tetrasporangiat and a connective appendage may be present. The five to 35 above to semi-permanent under constant carpels (carpels) are partially or completely fused. There are ten to a hundred ovules per carpel. The scars sit directly, usually without a stamp, in a circle on a disc.

The flowers are open during the day or night, depending on the species. The pollination is done by insects (mostly beetles , Entomophilie ).

The fleshy fruits, often surrounded by the bracts, are berry-like and contain a few or many seeds. The fruits, which are often embedded in the fleshy flower base, usually open by swelling of the inner mucus. The seeds have a small endosperm and usually an aril . The embryo is relatively small. The seeds of many species can swim through air pockets in the aril and the seed wall. There are two fleshy seed leaves ( cotyledons formed).

The ingredients are ellagic acid and gallic acid . 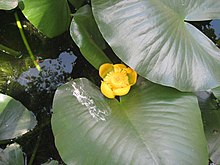 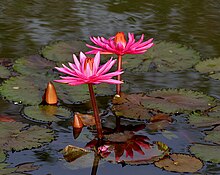 In the family Nymphaeaceae there are two subfamilies with five genera and 58 to 75 species:

Some species, but especially hybrids, are used as ornamental plants in parks and gardens. The red Barclaya longifolia and Barclaya motleyi are used as aquarium plants . The flowers of Nymphaea odorata are popular because of their strong scented flowers, especially in the morning.

The healing properties of some species have been studied.