The Sumac (Anacardiaceae; Engl. Cashew or sumac family ) form a plant family in the order of the soap tree-like (Sapindales). With around 70 to 82 genera and 600 to 800 species, they occur worldwide mainly in the tropics and subtropics , but sometimes also in temperate climates. Some species provide edible fruits and seeds - medicinal effects have been studied - and some are ornamental plants . 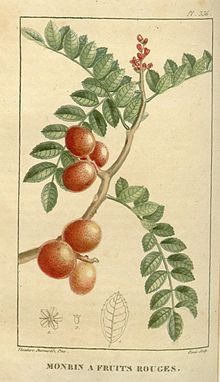 They are mostly evergreen, woody plants: mostly they are independently upright trees or bushes , less often half bushes or they are lianas . Some species are herbaceous perennials . Many species have resin ducts with clear or milky resins that quickly turn black and have a typical ( turpentine ) resin odor. Wood, leaves and fruits can be aromatic or poisonous.

The usually alternate, rarely opposite or in whorls, often concentrated at the ends of branches, arranged leaves often smell aromatic. The leaf blade is undivided or often imparipinnate (exception is the paired pinnate Spondias bipinnata ). The edge of the leaves or pinnate leaves is entire. There is often black drawing on the leaves. Stipules are missing.

Terminal or lateral, shamrock or panicle inflorescences are formed. The bracts are usually small, rarely large; in Dobinea they are membranous and fused with the flower stalks. The flowers are hermaphroditic or unisexual. The species can be monoecious ( monoecious ), dioecious ( dioecious ) separate sexes, gyno- dioecious or polygamomonoecan.

The relatively small flowers are radial symmetry and three to often five-fold. They have a double or single (sepalin and bract-like in Pistacia ) perianth . The bloom cladding sheets ( Dobinea ) are rarely missing . The three to five sepals are fused at the base. The three to five petals are free or rarely fused at the base. There are one ( Anacardium , Mangifera ) or two circles with five stamens each (rarely a total of twelve stamens). Either all stamens are fertile or there are one to nine staminodes . The ever slender stamens are sometimes fused at their base ( anacardium ). The anthers have four pollen sacs. It is a carpel present or two to five (rarely to six) fruit leaves are a syncarp, mostly upper constant, rarely half under constant up from constant ( Peyia , Semecarpus ) ovary grown in Dracontomelon they are not fully grown. Each ovary compartment contains an apotropic ovule . Often only one carpel is fully developed. The usually only style ends with one to five scars; sometimes three to six styles are also present ( Buchanania ). A mostly intrastaminal, nectar-producing disc is usually clearly developed. In many of the genera that are now included in this family, the flowers and inflorescences are greatly reduced. This resulted in them being run as families of their own. For example, the earlier Blepharocaryaceae have compact, involucre inflorescences, the dioecious separate-sexed Julianaceae and Podoaceae lack bracts in the female flowers. The wind-pollinated species usually lack a discus and bracts.

Mostly stone fruits are formed, but there is a great abundance of fruit types in this family. The mechanisms of propagation are diverse. In two genera Anacardium and Semecarpus , a meaty, is edible Arillus (here called Hypokarp) formed under the stone fruit, which is formed from the fruit stem and the receptacle. Within the genus Anacardium , only Anacardium microsepalum is missing an aril ; this species thrives in water-flooded forests of the Amazon and is believed to be distributed by large fish. Water dispersal has also been reported in three other genera, Mangifera , Poupartiopsis and Spondias . To be spread by the wind, there are different adaptations, for example enlarged sepals ( Astronium , Loxostylis , Myracrodruon , Parishia ), enlarged permanent petals ( Gluta , Swintonia ), broad bracts ( Dobinea ), a wing formed from the flattened fruit axis becomes ( Amphipterygium ), and in some genera the edges of the fruits have hairs ( Actinocheita , Blepharocarya , Ochoterenaea ). Instead of stone fruits, samaras (wing nuts) are formed in some genera: in Campylopetalum , Cardenasiodendron , Dobinea , Laurophyllus , Pseudosmodingium , Smodingium , a membranous wing is formed around the entire edge of the fruit or in Faguetia , Loxopterygium , Schinopsis a wing on only one side. Amphipterygium , Orthopterygium form airworthy collective fruits (syncarpia). Dry, achenaic fruits are formed in Apterokarpos . With cotinus the infructescence with long hairy inflorescence axes is the distribution unit. These adaptations with drifting fruits seem to be associated with colonization of dry habitats . A dry fruit is formed at Dobinea . The epicarp is thin, the mesocarp is mostly fleshy, fibrous, and the endocarp is hard. The embryo is often curved. 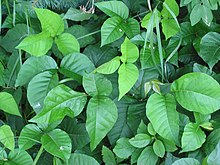 Contact with the poison ivy ( Rhus toxicodendron , Syn .: Toxicodendron radicans ) should be avoided.

About a quarter of all species, but all of the subfamily Anacardioideae, contain toxic dihydroxybenzenes with long unbranched side chains that cause skin irritation if the parts of the plant are touched. The endosperm is oily and sometimes starchy.

Species from the Anacardiaceae family are found in dry to humid areas worldwide. Mostly they thrive in humid lowland habitats . They are mainly found in the tropics and subtropics, but some species also extend into the temperate latitudes. In the New World the distribution ranges from Canada to Patagonia , there are occurrences in Africa, southern Europe, temperate to tropical Asia, tropical to subtropical Australia and on most of the Pacific islands. There are no species of this family in Northern Europe, temperate and dry Australia, New Zealand , on the Galapagos Islands , in extreme desert areas and at high altitudes; but they reach altitudes up to 3500 meters. The center of biodiversity is Malaysia .

In 1759, Bernard de Jussieu put the genera classified here today in a subordination of an order "Terebintaceae"; his nephew Antoine Laurent de Jussieu published this classification in Genera plantarum in 1789 : secundum ordines naturales disposita, juxta methodum in Horto regio parisiensi exaratam, anno M.DCC.LXXIV (Apud Viduam Herissant et Theophilum Barrois, Paris). Robert Brown edited the same genres in 1818 in the publication by John Murray on the expedition to the Congo led by James Kingston Tuckey and the herbarium created by Christians Smith . Augustine Pyramus de Candolle published in 1824, with Robert Brown's Cassuvlae or Anacardeae, another description of this kindred with the genera Anacardium , Semecarpus , Holigarna , Mangifera , Buchanania , Pistacia , Astronium , Comocladia and Picramnia . John Lindley presented a new description of this family group in 1831 with the Anacardieae and Sumachineae, giving the name "Terebintaceae" in favor of Anacardiaceae and adding the genera Anacardium , Holigarna , Mangifera , Rhus , Mauria . The type genus is Anacardium L.

The sumac family (Anacardiaceae) comprises four subfamilies with 70 to 82 genera and about 600 to 800 species . 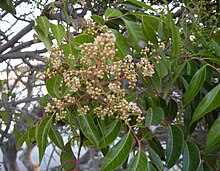 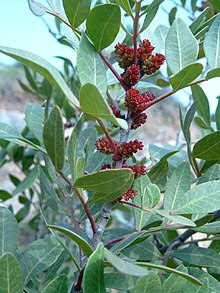 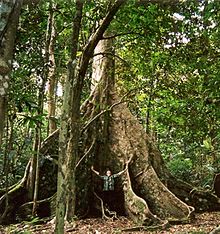 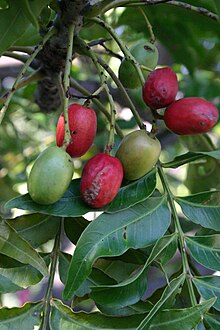 Subfamily Spondioideae: leaves and fruits of Harpephyllum caffrum , which is suitable as a robust houseplant. 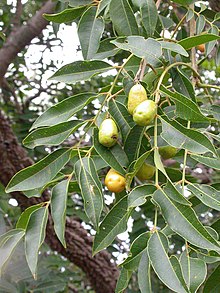 Division of the family into subfamilies and their genera

According to Susan K. Pell 2004, the family is divided into two subfamilies and some tribes: 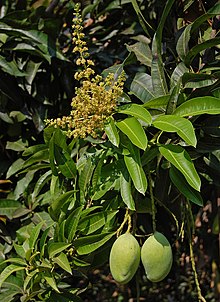 Some species and their varieties are grown worldwide (in the tropics). They are used to extract edible fruits and seeds, to extract spices (as is the case with gerber sumac ), as a raw material for pharmaceutical products and wood. Some species are used as ornamental plants. Known worldwide are: Mango ( Mangifera indica ), Pistachio ( Pistacia vera ), Cashew ( Anacardium occidentale ) and Brazilian pepper tree ( Schinus terebinthifolia ). Other crops are only widespread in their pantropical growing areas, such as the Spondias fruits, the Marula ( Sclerocarya birrea ) in Africa or the Antrocaryon fruits in the Neotropics . Their marketing is restricted due to their poor transportability.