This article deals with the Hölloch in Switzerland; for the cave of the same name in Germany see Hölloch (Germany) .

The Hölloch (also in the spelling Höllloch ) is a karst - cave system in Muotatal in the Swiss canton of Schwyz . With a known length of over 204 km, it is the second longest cave system in Europe and the eighth longest in the world. The entrance to the Hölloch is in Muotathal above the hamlet of Stalden . 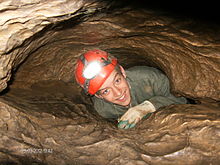 The valley residents had long known the entrance and a small part of the cave. The Hölloch was first walked in 1875 by the mountain farmer Alois Ulrich from Stalden; systematic research began in 1889.

In 1905 a Belgian-Swiss company began to expand the cave for tourism: the front part of the cave was opened up with electricity and illuminated, which was revolutionary for that time. Stairs and railings were installed and in the summer of 1906 the first part was opened for tourist use. On 14./15. In June 1910 a flood destroyed the entire electrical lighting system. The touristic development was ended again after a few years by nature. Research was only resumed in the Hölloch after the Second World War; In 1949 the first bivouac was built.

In 1993 the Trekking Team AG leased and in 1995 bought the touristic usage rights at the Hölloch. Since then she has been organizing guided tours in the cave, which at the time was explored over 172 kilometers. Research continued in parallel. In May 2004, a 190.1 kilometer corridor system was known in the Hölloch.

The official measurement values ​​of the Hölloch Research Association (AGH) in 2012 for the first time reached a total length of over 200 km. The current measured cave length is 203.094 km and the difference in altitude is 939 meters (as of 2017). The Hölloch has been very well researched and there are hardly any unexplored tributaries in the accessible (dry) area.

Structure of the cave

The Hölloch consists roughly of three levels, with the lowest level largely being below the groundwater level and therefore filled with water. Due to the geological strata of the rock, the corridors usually slope to the north, and there are only a few corridors that run horizontally.

Several times, cave explorers were surprised by penetrating water and locked in for a few days. Four more entrances have been discovered (or opened) since 1980. Therefore, those trapped since then can z. B. can be reached from an overhead entrance. However, the access is very demanding and not suitable as an escape exit. In addition, there are food stores in various bivouacs that several people can use to supply themselves for a few days, the so-called cathedral bivouac for tourist tours and several research bivouacs for cave explorers. In addition, the water situation in Hölloch is better known and attempts are made to avoid risks, especially during touristic tours.

Anyone who has discovered a previously unknown corridor or room is entitled to name it. Often names are used that reflect the special characteristics of this place. There is, for example, the snake walk or the knight's hall. In the early days of exploration, corridors were also named after the discoverer.

The water finds its way from the silver system to the Hölloch. If the cave explorers could confirm this connection, the Hölloch would grow one stroke by 38 km. At the moment, however, the finding of this connection does not seem in sight. In order for the caves to be officially connected, a walkable passage would have to be discovered. There is also a lot of hydrological research in order to get to know the Hölloch and the paths of water better and better. Thanks to several measuring stations in the cave, on the surface and at the most important spring, the «Sneaking Brünnen», the water situation in the Hölloch could be assessed quite well up to the great flood in summer 2005 . Since then, water behavior has changed, and the empirical values ​​that were valid until summer 2005 are no longer valid without reservation. In principle, cave visits or expeditions with the necessary precautionary measures have not become more dangerous, but you have to observe the behavior of the water over a longer period of time in order to gain new experience.

New animal species are often found in large cave systems. In 2010, the approximately three millimeter large, brown-white pseudoscorpion Pseudoblothrus infernus was discovered in Hölloch . The animal, which is neither assigned to the spiders nor to the scorpions, is equipped with two grasping tongs and a poison gland.

There are different explanations for the name Hölloch . The cave explorer Alfred Bögli derived the name from Alemannic hääl, "slippery, smooth". The Muotatal local population pronounces the name of the Hölloch, however, Helloch , which points to a connection with the older Swiss German Hell «Höhle, Hölle». In fact, Hell is a very common place name and often denotes a "gruesome", remote place. The location names Hellbach and Helltobel , which are located in the immediate vicinity of the Hölloch, are documented as early as 1501 and 1639, respectively.