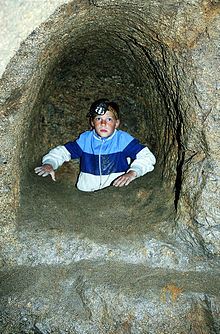 Bottlenecks are characteristic of earth stalls. In order to get to the next section, you have to squeeze your way through these "slips".

As Erdstall in the northeastern foothills of the Alps in one is medieval man-made underground, non -developed duct system referred. The term "Erdstall" means "place under the ground" or "earth lug " and has nothing with a barn to do for the separate accommodation of pets.

The vernacular calls the facilities “underground passages” or simply “ secret passages ”. The name "Schratzlloch" is particularly common in Bavaria, as popular belief is that they were dug by dwarfs ( Schrat , Schratzl, Schrazel, Schranzen). In addition, there are often designations such as “dwarf” or “Quergloch”, in Upper Austria “crypt”, as well as various local terms. The term “Erdstall”, which is common in Lower Austria, has been predominant in specialist literature since the 19th century.

The corridors are usually arranged at an angle, up to 60 cm wide and 1.0 to 1.4 m high. In many earth stables there are also so-called lamp niches as well as mostly terminal chamber-like extensions and seating niches. Bottlenecks that can only be passed by crawling are called "slip".

For the modern systematization, earth stable researchers made a rough categorization of the most common types of construction:

There are earth stables in Bavaria (over 700), Upper Austria , Lower Austria and a few in Styria and Burgenland . Similar systems are also known in Baden-Württemberg , Saxony-Anhalt , Poland , the Czech Republic , Slovakia and Hungary . The geographical distribution of the Erdststall depends, among other things, on geological conditions. The soil must be sufficiently firm and yet easily workable. Loess , Schlier , clay , sandstone or the so-called Flins (weathered granite ) offer the right conditions . There are no earth stalls in solid rock or loose gravel.

Underground objects in a comparable construction, but also in some cases with a different period and probably also function can be found in Great Britain (especially Cornwall and Scotland), where they are referred to as basement , Weem, Fogou or Earthhouse, as well as in Ireland , Spain and France .

There are also legends of underground passages that are supposed to connect a place A with a place B several kilometers away. However, there are no earth stalls of this length. Existing corridor systems are rarely longer than 50 meters. The real core behind such legends is often that there is an earth stable in both places.

At the end of the corridors of earth stables there are often niches and benches.

A charcoal find from the auxiliary building shaft of an earth stable in Bad Zell (Upper Austria) was dated to the period between 1030 and 1210 by means of radiocarbon dating ( 14 C) . The Erdstall Höcherlmühle (Bavaria) was also built according to a 14 C dating from the construction shaft between the end of the 10th and the middle of the 11th century AD at the earliest. Since auxiliary construction shafts were only created and filled in for the construction of an earth stable as soon as the earth stable was completed, it can be assumed that the earth stalls were built during this time. In the Erdstall von Rot am See a corridor with stone blocks was subsequently narrowed again to a slip through, which happened after a 14 C-dating of the clay joint between 1034 and 1268 AD.

In addition, finds in earth stables enable a statement to be made about when the corridors were visited by people.

The first documented mention of the designation "Erdstall" comes from the year 1449. In the land register of the rule Asparn an der Zaya a subject named Methl Huendl is mentioned, who for the 3 1 ⁄ 2  yoke large field "on the ground" six pfennigs to the Domination has to pay. A subject named Tumeregker also has to pay six pfennigs in levy for his 3 yoke field “on the ground”.

The purpose of the earth stables is unclear. There are two theses that oppose each other.

The thesis of the places of worship assumes that the earth stalls are symbolic empty graves. Such empty graves are said to have been dug by medieval settlers at the new place of residence in order to create a new, symbolic grave for the souls of their ancestors, because they had to leave the old graves at the old settlement sites beforehand. One variant is the thesis of the “soul chamber”. The local history researcher Anton Haschner from Markt Indersdorf , who died in 2007, suspected that the souls of the deceased were temporarily staying in the earth stables, where they would spend the “waiting time” until the Last Judgment . The living wanted to avoid that the deceased could spread fear and terror among the people. It was only when the theological idea of purgatory emerged at the end of the 11th century that people stopped building earth stables, since they believed that souls were now safe in a place on the other side.

Occasionally it is used as an argument for this thesis that some earth stalls have pointed arched building elements, which are reminiscent of sacred buildings. The pointed arch, which emerged in the 13th century, is not limited to sacred buildings, it can be found as a typical stylistic and constructive element of the Gothic style epoch in the secular buildings. No practical use can be ascribed to the construction element of the tour at the end of some Erdstall systems.

According to the refuge thesis, earth stalls were created as hiding places in which endangered people could disappear "as if swallowed by the ground" during attacks. Many earth stables have components that can only be explained meaningfully if they are interpreted as a place of refuge, such as locking devices that can only be operated from the inside. Even niches, benches and air holes in earth stables indicate the use as a place of residence for people.

The skin-tight slips typical of earth stables provide effective protection against intruders. The narrow, angled corridors force intruders to move around individually and in a crawling position. When crossing the bottleneck, an intruder is clearly restricted in his freedom of movement and cannot use his hands for his defense. In addition, unlike the defender, he does not know the narrow, dark and winding corridor in front of him. Thus intruders are helplessly at the mercy of a defender and can even be overwhelmed by a much weaker opponent. The narrow and easily camouflaged entrances prove the secrecy of the facility.

In the event of an attack, the earth stables make it possible to quickly disappear and hide. Earth stables, which are in direct connection with medieval fortifications and are an integral part of the fortifications, also speak in favor of the refuge thesis. Examples of such earth stables can be found under the local mountain of Gaiselberg or Großriedenthal ( Lower Austria ), or under the fortified church of Kleinzwettl (Lower Austria, Waidhofen an der Thaya district ). A 52 meter long corridor system is accessible from this fortified church.

Even if not from the time they were built, there is plenty of evidence that at least later, earth stables were repeatedly used as refuge systems and are quite suitable for this. It has been empirically proven that earth stalls are suitable for a short stay. In one experiment, three people could easily survive for 48 hours in an earth stable.

On the other hand, staying in earth stables is uncomfortable; an adult usually cannot stand upright in the chambers. Restricted freedom of movement, cold and moisture represent a considerable burden. Earth stables are only suitable for a short stay because the essential food and water have to be taken with you. In earth stables there is also no possibility of disposing of faeces. At best, these can be buried.

Sick, old and overweight people or pregnant women cannot pass through the narrow passages. The low temperature prevailing in earth stables cannot be increased by a fire because of a lack of oxygen and smoke formation, even if there had been exhausts for the smoke, this would have given the hiding place. If looters discovered the entrance to an earth stable, they could have fumigated the people in the earth stable or filled up the entrance, which would have resulted in death by suffocation for those trapped in the earth stable.

In addition, hardly any artifacts were found in earth stables , which speaks against the presence of people, since lost or abandoned objects could be expected even with a short stay.

The Benedictine Father Lambert Karner ( Göttweig Abbey ) is considered to be the pioneer of earth stable research . From 1879 to 1903 he examined numerous earth stalls and published his research results in the book "Artificial Caves from Old Time". Karner gives a number of arguments against the escape route theory in his work.

It is only in the last few decades that earth stables have occasionally been examined by the responsible monument conservation authorities. Examples are the Erdstäl von Stützenhofen in Lower Austria in 1983, Rot am See in Baden-Württemberg in 1990, Mitterschneidhart in Lower Bavaria in 1991, and 2011 in Glonn in Upper Bavaria . This means that the importance of the Erdstalls in terms of monument preservation is recognized today.

On the Kapellenberg von Althöflein in the market town of Großkrut in Lower Austria there is an Erdstallmuseum, where the Erdstall there can also be viewed. In the district museum Walderbach in the Upper Palatinate, a section on stables and Schrazellöcher is integrated.

As part of a guided tour in Zwiesel (Bavaria), an underground corridor system can be viewed , the origins of which lie in earth stables.

From 2010 to 2012, a traveling exhibition on earth stables was shown in the Glentleiten open-air museum , in Passau and Kelheim .

The Ratgöbluckn stables in Perg is the largest walk-in stables in Upper Austria and is part of the outdoor facilities of the Heimathaus-Stadtmuseum Perg .

In 2015 the “Sub Terra Museum Vorau” was opened in the Vorau Abbey . According to the cave researcher Heinrich Kusch, there is a labyrinth of corridors under the monastery , which should extend over seven levels to a depth of more than 78 meters, for which there is no scientifically accepted evidence.

In the pilot episode The Labyrinth of the ZDF television series Your Mission, Father Castell , it is about earth stables.