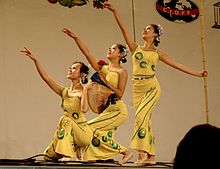 Chinese dancers at the dance of the Dai minority

The ancient Chinese dance is today (2005) most of images, characters and texts that have been discovered in archaeological finds, reconstructed. Mostly it is danced with long sleeves. It also contains elements of ballet . Since it is a reconstructed dance, it has no claim to authenticity , which, however, does not damage its beauty in the least.

With an area of ​​9,572,419 km², China is one of the largest countries in the world. Its cultural diversity is just as great. The billion people can be divided into 56 ethnic groups, each of which has its own dance culture. This article explains some of the most popular dances:

Dances of the Han (Yangge)

The majority of the population in China belong to the Han . The Han dances are very lively and facial expressions play an important role. The best known are the "Yangge". This is a farmer's dance that is danced differently depending on the region. This dance form was originally danced on Thanksgiving Day, and can still be seen today on the Spring Festival and the Lantern Festival . People dance with a fan and a handkerchief and sometimes even on stilts . The dancers are accompanied by drums, among other things . Basically “Yangge” are danced by groups that contain clearly defined figures, which almost turns the dance into a “dance theater”: mostly one or more young girls (nü), a clown (chou), young men (gongzi) and an old one Woman (laokuai). Many elements of traditional Chinese opera have been incorporated into this dance . The acrobatics finds its place here and is usually shown by the clown. However, the characters vary depending on the region. The roles described here come from the Yangge of Hebei Province and serve only as an example.

Characteristic of the Tibetan dance are the bobbing movements and the slightly bent upper body. The dance is danced with boots, the women wear skirts. In addition, Tibetan women are always richly adorned with precious stones and silver . Turquoise and amber are especially popular. The special thing about Tibetan dance are the long sleeves. These come into their own when you swing your arms. The dances are often danced in a circle, in mixed groups.

The Uyghurs live mainly in the Xinjiang Autonomous Region in northwest China. A minority also live outside of China in neighboring countries such as Uzbekistan. The dances of the Uighurs are thus similar to the Central Asian dances. Great emphasis is placed on beautiful arms and hands. The facial expressions are very sophisticated: there is even dancing with the eyebrows. Head and shoulder movements also play an important role. The steps are mostly small and sometimes very fast, many turns and deep back bends also occur. The dancers usually wear a gilet over a dress, under which they always wear trousers (the Uighurs are Muslims). The dancers wear their hair in small, long braids, and they dance in golden heels. Sometimes the dancer balances several cups on her head during the dance, or she dances with two small plates in her hands, on which she keeps the beat.

In Mongolian dance, cups are sometimes balanced on the head. The shoulder and arm movements are characteristic. The dancers often imitate horseback riding (with their feet they imitate the gallop , with their hands they imitate the reins). This is due to the nomadism of this people. The arm movements are reminiscent of the wings of a falcon or eagle . The women wear very wide skirts when dancing, the men relatively tight trousers. Both wear boots.

Dance of the Dai

The Dai minority live in southwest China. Their most famous dance mimics the elegant, proud movements of the peacock , the “ totem animal ” of this minority. When dancing, the peacock's head is imitated with the fingers. Other movements (flying, drinking water and then shaking the feathers) are represented with the arms. The dancers wear tight wraparound jackets and crop tops. But even within the ethnic group there are big differences when it comes to clothing. When dancing, however, the clothes mentioned above are mostly worn, except for the peacock dance, for which a long dress is worn, which is adorned with peacock feathers.

The first ballet school in China, the Beijing Dance School, was founded in 1954 with Dai Ailian as its director. There were some outstanding Russian teachers, including Pyotr Gusev, who introduced the Russian education system. In the following years ballets such as Swan Lake and Romeo and Juliet were performed. The National Ballet of China was founded on December 31, 1959 as the "Experimental Ballet Company" of the Beijing Dance School. During the Cultural Revolution, under the control of Madame Mao, revolutionary model ladders came to the fore, and the repertoire was eventually reduced to two ideological ballets - The Red Women's Battalion and The White Haired Girl . After the fall of the Gang of Four , Chinese ballet began reforming, reviving classical Western ballets and adding modern ballets from around the world to its repertoire.

Other ballet schools in China:

Western ballroom dancing became popular in the 20th century, before men and women from respectable families were not allowed to dance together. It was popular in Shanghai nightclubs in the 1940s. Ballroom dances were replaced by group dances like the yangge during the Cultural Revolution.

The dances of the other ethnic groups are less known outside of China. What all dances have in common are the colorful costumes. Otherwise there are very big differences between the individual dances. However, researchers seem to agree that many dances stem from rituals ; H. are of religious origin or serve (or served) to raise children and young people. Therefore, often in the dances gestures of everyday life imitated.