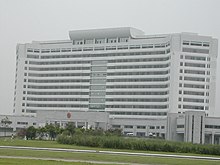 Taizhou ( Chinese  台 州市 , Pinyin Tāizhōu Shì ) is a newly developed, district-free city in the Zhejiang Province of the People's Republic of China . Taizhou is located in the middle of the predominantly Wu- speaking coastal province of Zhejiang and has a subtropical, mildly humid marine climate. The land area of ​​the city is 9,413 km² and the water area 80,000 km². Taizhou has 6.08 million inhabitants (2016). In the actual urban center of Taizhou lived 1,189,276 people (2010 census).

At the county level, Taizhou consists of three city districts, three independent cities and three counties. These are:

Taizhou is easily accessible and has a good infrastructure. To the south of Shanghai's economic and technical development zone , between Wenzhou and Ningbo , Taizhou is the transportation hub of Zhejiang Province.

Taizhou has its own airport (Huangyan) and is roughly halfway between the airports of Ningbo (150 km) and Wenzhou. The Ling Jiang , the third largest river in Zhejiang Province, and the Yongning Jiang flow through the city; inland waterway transport is well developed.

In October 2009 the railway connection from Hangzhou-Ningbo via Taizhou to Wenzhou in the south was opened. Taizhou has three train stations in Sanmen, Wenling and Huangyan (Central Taizhou). The line is built as a high-speed road, but not yet approved as such on all sections. It currently takes 2.5 hours to drive from Huangyan to Hangzhou. After completion, this time will be significantly reduced. A branch towards Jinhua is planned for the future.

The city's coast offers a number of excellent ports. Haimen (Jiaojiang) Port is the third largest in Zhejiang Province after the ports of Wenzhou and Ningbo. Its handling capacity is 200 million tons per year.

A nuclear power plant is under construction near Sanmen.

Thanks to the favorable climate, Taizhou has become one of the most famous locations for fruit growing in China. Mandarins , Myrica rubra , pipa fruit , strawberries , tea and vegetables are Taizhou's most important products. The seedless mandarins and the tea produced here have received several state awards. The Yuhuan grapefruit is known all over China. In addition, Taizhou has the largest cauliflower production in the country.

Since the implementation of the reform and opening-up policy in China, Taizhou has made great strides in economic and social development. The industry in particular is characterized by rapid growth. A number of brands are known nationwide , such as Qianjiang (motor industry), Geely (automotive industry), Feiyue (sewing machine manufacturing industry), Xingxing (freezing machine manufacturing) and Supor (kitchen appliances).

The banking market in Taizhou is particularly developed and specialized in light industry. In contrast to most Chinese cities, which mostly only have one regional commercial bank, Taizhou has a total of three local commercial banks that have their main branches there. Taizhou City Commercial Bank in particular stands out from the typical Chinese banking spectrum with its advanced methods and highly efficient organization. One reason may be the completely private ownership structure.

Numerous shipyards have set up shop along the Jiao-Jiang River . The number of shipyards increased particularly in the boom years in shipbuilding up to 2008. From 2008 onwards, many shipbuilding companies ran into economic difficulties. Some of the shipyards build ships for western shipowners under strict quality control. Most shipyards, however, build substandard ships.

The car manufacturer Jonway also has its headquarters in Taizhou .

Two thirds of the land area of ​​Taizhou is mountainous country crossed by many rivers, and together with the plains forms a charming landscape. The Tiantai Mountain is the origin of the Tiantai School of Buddhism and the Southern School of Daoism . Taizhou is known as the origin of the cooperatives in China. Other attractions in the area include the Guoqing Temple, the Stone Beam Waterfall and the Art Glass Exhibition Hall. Stone Dam Village is the place in mainland China that was lit by the first sunlight of the 21st century.